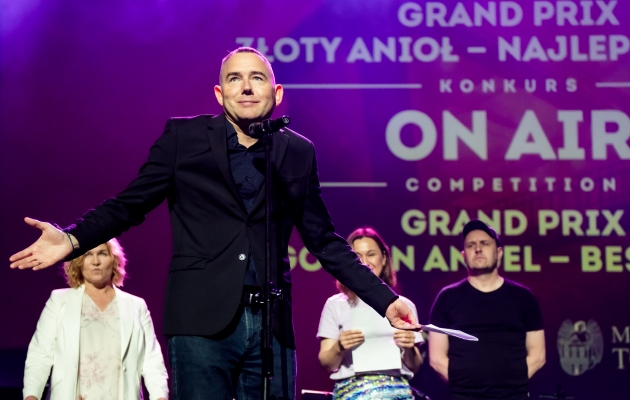 The actors Aleksandra Popławska and Robert Więckiewicz are the two winners of the Golden Angel Award for Artistic Insolence. The Golden Angel for Lifetime Achievement goes to film director Filip Bajon. Maria Dębska receives the Golden Angel Award for a Promising European Actress. The Flisak Award founded by the President of Toruń for film artists associated with Kujawsko-Pomorskie Region is given to Tomasz Ziętek. The winning film of the festival is a powerful drama about a gymnast fleeing from Ukraine. The winner of the Polish Film Competition is a film début featuring an outstanding performance of Katarzyna Figura.

The Grand Prix and the Golden Angel Awards were given to film director Elie Grappe and film producers Tom Dercourt and Jean-Marc Fröhle, who are the authors of the film ‘Olga’. The jury agreed to give the award for a poignant portrayal of a female character fighting for her inner autonomy. The film makes a tremendous impression with the precision of its narrative, exceptional insight and sensitivity in presenting such a complex subject, as the jury explained in their official statement.

‘Olga’ is a Swiss-French-Ukrainian co-production. The film is a story about a 15-year-old Ukrainian gymnast, who is extremely passionate about her favourite discipline. While at a training camp in Switzerland, she does her best to fit into the national team. In the meantime, the Euromaidan social revolt is unfolding in Kiev, and suddenly everybody Olga cares about is involved in it. As the young girl is getting ready for the European Championship, a revolution breaks into her life devouring everything standing in its path.

The jury also decided to award an honorary mention to the film ‘Happening’ directed by Audrey Diwan. It is an uncompromising story about a woman, who is denied any rights to her own body by state authorities. It is a painful film about systemic oppression and loneliness – said the justification for the award read during the Closing Ceremony of the festival.

The film is based on an autobiography written by Annie Ernaux, which takes place in 1963, in France. Anne, the main protagonist, is a student of French literature at a university. She is a talented woman dreaming of an academic career, and there is a world of opportunity waiting for her. Quite unexpectedly, after a visit to a doctor, she realises that all her plans may never see any fruition. Anne finds out she is pregnant, which comes as a great surprise to her. She is aware that with a child she has no chance for a professional career, and it will thwart everything she has hoped to achieve and to which she has dedicated so much. The young woman now faces a grave dilemma. She does not want the baby, but since abortion is illegal in France, any attempt at having it will be the end of her studies, and it will take her straight to prison. The clock is ticking and pressure is building up - Anna’s future is now at stake.

Same as every year, the jury in the From Poland Competition was the festival audience who decided that the main award should go to the début film ‘Chrzciny’ directed by Jakub Skoczeń.

During the Closing Ceremony, Golden Angel Awards for Artistic Insolence were given to Robert Więckiewicz and Aleksandra Popławska. Both artists can boast about impressive artistic achievements and numerous memorable film roles.

The Golden Angel Award for Lifetime Achievement was presented to Filip Bajon, for who it was definitely not the first time to have visited the Tofifest IFF. Kujawy Pomorze Region. In 2018, he came to Toruń with the film ‘Kamerdyner / The Butler’, and won the Golden Angel Award in the From Poland Competition.

The Golden Angel Award for a Promising European Actress was given to Maria Dębska. Her portrayal of Kalina Jędrusik in the film ‘Bo we mnie jest seks / Autumn Girl’ directed by Katarzyna Klimkiewicz (which was included in the programme of this year’s edition of Tofifest) was definitely the greatest and most demanding of her film roles to date.

The Flisak Award founded by the President of Toruń for film artists associated with Kujawsko-Pomorskie Region was given to Tomasz Ziętek, a film and theatre actor, and a guitarist, who was born in Inowrocław.

Following the Closing Ceremony of the Festival, we could enjoy a performance given by Paulina Przybysz, as part of the Music. The Superpower ’22 music concert. It was a homage paid to cinema and artists. Paulina Przybysz sang a number of cover songs of such famous artists as Radiohead, Billie Eilish, David Byrne, or Whitney Houston. A special guest to the festival was Tomasz Ziętek, winner of this year’s Filsak Award.

Please remember that you can watch the films awarded at the previous editions of Tofifest until 11th July, on the VOD platform of the Tofifest IFF. Kujawy Pomorze Region.