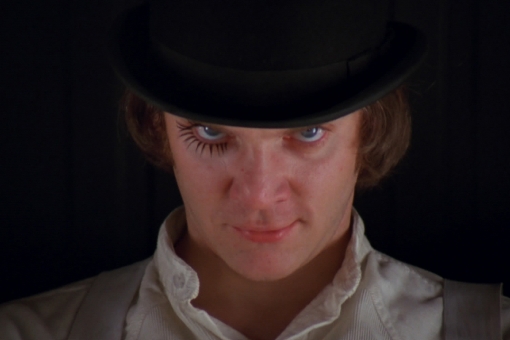 “A Clockwork Orange” is a cynical and anarchic film story, based on the already cult novel by Anthony Burgess. The main character is Alex de Large, a young and degenerated leader of “Droogs” —  a gang of young and extravagant hooligans, who wear white clothes, bowler hats and Martens boots. They spend their evenings sitting in pubs, drinking milk and listening to the music of Ludwig van Beethoven. But the night is their hunting ground: they plunge into the city to beat and rob innocent people and rape women. Finally, they commit murder... The gang is torn apart and the boys decide to change their leader. Alex is obviously against the idea, so they set him up. Alex is arrested and sentenced to 14 years in prison. Having served two years, he gets an offer that he cannot refuse: his sentence will be reduced, if he agrees to undergo a new experimental therapy, which tries to eradicate violent tendencies. Alex immediately signs the necessary documents and is taken to a specialist clinic, where he receives brainwashing treatment, twice a day.

Stanley Kubrick (1928-1999) — director, producer and screenwriter. He was born in New York, where he graduated from Taft High School in Bronx. Before turning 30, he had already made a documentary, established his own production company and directed three feature films, which gave him the reputation of the most promising American director. In 1961, he left the United States and made England his home, for the rest of his life. His first European film was Lolita, based on the novel by Vladimir Nabokov. In 1968, he made 2001: A Space Odyssey — probably his greatest creation ever.