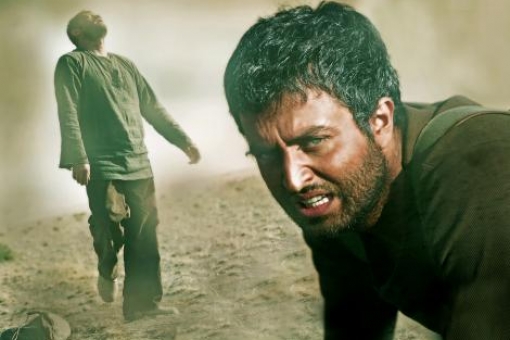 The Polish-American boxer Daniel Dalca escapes his problems by enlisting in the army. After four years when his mission is over, he was to sent back home where he would have to face his past problems. So he decides to desert the army. In the middle of a desert he gets bitten by a scorpion. On the very day of her marriage, 29th of March 2003 Rebecca lost her husband during the British-American attack on Iraq. Today she's managing a little restaurant on the Iraqi borderline where she hosts Iraqi and American soldiers. She goes to the landmines to clear mines in order to plant trees and palms at the very same places. Saleh Al Marzouk is an Iraqi math teacher who lost his family on the 29 March Baghdad bombings. Meanwhile he detained and later imprisoned at the infamous Abu Ghraib prison for three years. Disguised as a woman, he plans to blow himself up at a restaurant on Christmas Day in 2009. There, he suddenly discovers a picture of himself on the wall, when Rebecca enters the restaurant. Shocked, Saleh runs away.

The film has been selected as the Iranian entry for the Best Foreign Language Film at the 83rd Academy Awards.

Mehdi Naderi — born in 1973 in Tehran (Iran). He started his career 1988 with directing theater. Meanwhile he has not only directed several documentaries and fiction films but is also very engaged as a producer, scriptwriter, advisor and editor. In early 2010, he finished his first long-feature Farewell Baghdad that received positive reviews by national and international critics.