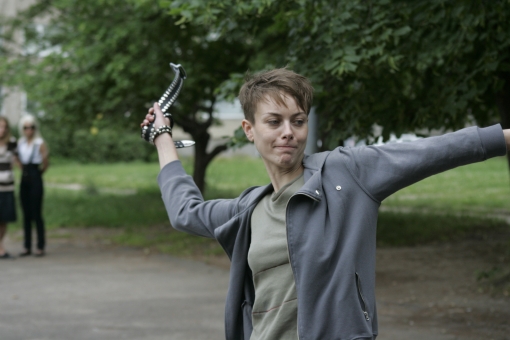 Young provincial girl Vilė comes to the big town with ambitions about high education. She tries to find a rented apartment for living and notices a hand-made sticker with anarchy signs on it. Led by strange sticker Vilė meets boyish looking and always wearing a T-Shirt with anarchy sign on it girl Sandra. Mutual sympathy and Vilė becomes Sandra’s tenant. From her first days in the big town Vilė gets a perfect guide — always strong and optimistic Sandra. Under her anarchistic philosophy’s leadership Vilė leisurely throws away her provincial modesty and fears, but incidental meeting with member of big town’s punk community overturn all her new views. Vilė understands that Sandra’s anarchy has nothing to do with alternative underground culture or politics…

Saulius Drunga (born in 1972) is a self-taught cinema dramaturge and film director. Worked with lots of Lithuanian underground filmmakers (as co-writer and consultant). In 2005 one of his screenplays made an impression on well-known European script editor David Wingate, who recommended author to Sources 2 Script Development Workshop (Germany). There was developed Anarchy in Žirmūnai screenplay — winner of New Talent Award at Cannes Film Festival in 2007. The same year S. Drunga became gainer of Debut of the Year Prize founded by Lithuanian Cultural Department. His debut film Anarchy in Žirmūnai reached cinema theatres in 2010.