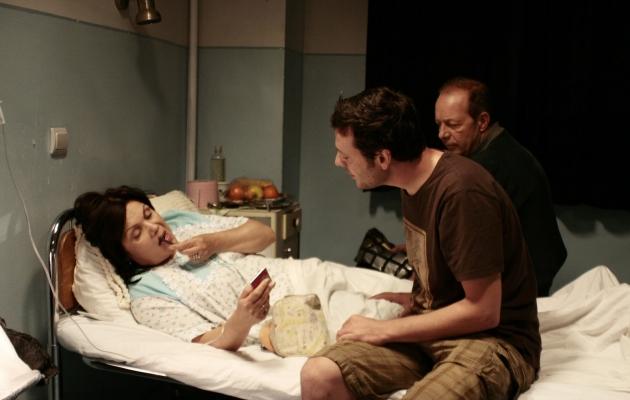 Alex is a somewhat neurotic person, in his thirties. He has a strong bond with his mother and his life spins out of control, when she is admitted to a hospital. Alex sees the hospital as a grotesque zoo, full of bizarre figures and unexpected events. Alex is trying to pull himself together in this new situation, but being surrounded by people full of good intentions, he is slowly becoming paranoid. As his mother is gradually recovering, he makes mistake after mistake, and each of such mistakes is full of best intentions...

The film by Adrian Sitaru was based on his personal experiences, although it is filled with surreal and absurd scenes.

Adrian Sitaru was born 1971 in Deva (Romania). He is a director, producer and actor. After studying Film Directing in Bucharest, he made the short film Waves (2007). His first feature Hooked (2008) was selected for the Venice and Toronto festivals and won awards at Palm Springs, Thessalonica, Mons, Buenos Aires and Estoril. In 2009 he made two new shorts, Lord (2009) and The Cage (2010). Adrian Sitaru has also made several TV films for Hungarian television. His second feature, Best Intentions, won best directing at Locarno IFF.