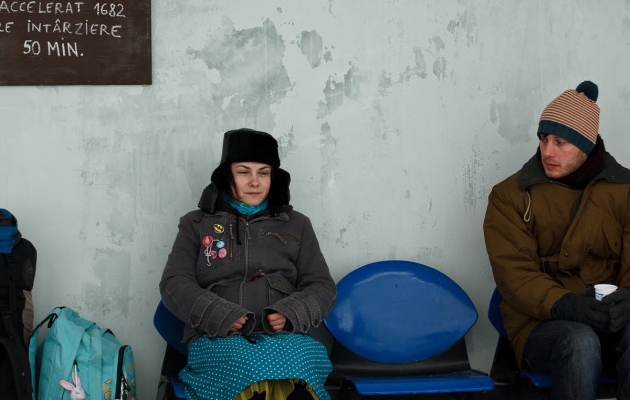 It’s Christmas Eve in a small mountain train station and four people are waiting for a train that’s stuck in snow hundreds of kilometers away. They don’t know each other and each of them must reach their destination as soon as possible. As the hours pass and the train gets more and more delays, Madalina, Cristi, Ozana, Alex share the absurd, the hope, the anger, the despair. Because they are accidentally stuck here. Because no one knows how long it will take.

Iulia Rugină was born in 1982 in Bucharest (Romania). She has studied film directing at the National University of Theatre and Film in Bucharest, where she wrote and directed four short films during the 4 years of studies. Her student films have been screened at international film festivals in Cannes, Oberhausen, Sarajevo, Munich, Brussels and Seul. She has recently graduated from a master degree in film directing at the same university. Stuck on Christmas was her master degree graduation film.