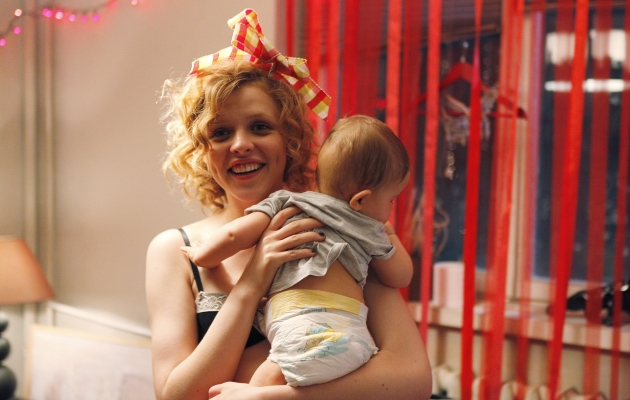 Natalia is 17 and she has just had a baby. However, it was not a duff, because Natalia had planned it to happen. She and her boyfriend Kuba are trying to cope with parental duties, although they are not exactly adults themselves... Natalia wanted a baby, because it is cool to have one. All young celebrities have kids — take Britney Spears or Nicole Richie as examples. But why would she really decide to become a mother at such a young age? Maybe the answer to that can be found on Internet blogs, written by teenage girls? They want a child to have somebody, who would love them for real, and to have somebody to love.

Baby Blues is a bold, truthful, shocking, but also slightly comical portrait of a generation on young Poles — the generation of Facebook, text messages, blogs, and fast foods.

Katarzyna Roslaniec was born in 1980, in Malbork. She is a director and screenwriter, and a graduate from the Faculty of Economics at the University of Gdansk. She has also graduated from the Faculty of Directing at the Warsaw Film School, and the Script Programme at the Andrzej Wajda Master School of Film Directing in Warsaw. Her debut feature film was Mall Girls, which was awarded, among others, at film festivals in Cottbus, Gdynia, Koszalin, Seoul, Valencia, Zittau, and Zlin.