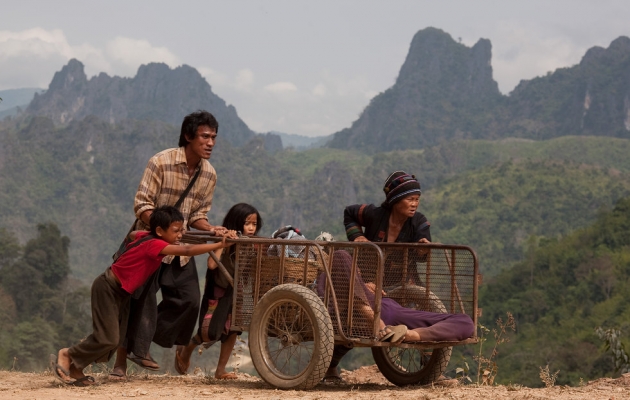 Laos: A boy (Ahlo, 10), who is believed to bring bad luck, is blamed for a string of disasters. When his family loses their home and are forced to move, Ahlo meets the spirited orphan Kia (9) and her eccentric uncle Purple: an ex-soldier with a purple suit, a rice-wine habit and a fetish for James Brown. Struggling to hang on to his father’s trust, Ahlo leads his family, Purple and Kia through a land scarred by war in search of a new home. In a last plea to try and prove he’s not cursed, Ahlo builds a giant explosive rocket to enter the most lucrative but dangerous competition of the year: the Rocket Festival. As the most bombed country in the world shoots back at the sky, a boy will reach to the heavens for forgiveness. Gripping yet heart-warming, The Rocket is a deeply personal story about the determination of a boy who has the odds stacked against him, set against the epic backdrop of a war-ravaged country on the brink of huge change.

Kim Mordaunt was born 1966. He is a graduate of the film production degree at UTS (University of Technology Sydney), and a diploma in acting from one of the UK’s top drama schools LAMDA (London Academy of Music and Dramatic Art). ﻿His extensive documentary verite work, as both director and cinematographer, has honed his ability to paint fiction with truth and to shoot it in a way that feels very immediate and intimate. The Rocket is Kim’s debut feature.