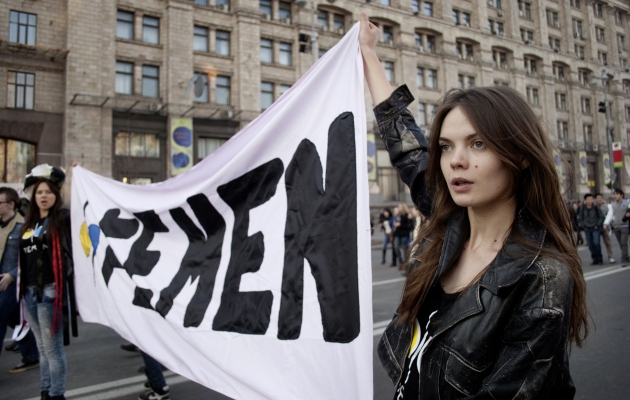 The programme of film screenings include an original selection of the latest films made in Ukraine.

TOFIFEST will see the Polish premiere of Brothers — the Final Confession by Victoria Trofimenko. We will also see the Ukrainian candidate to this year’s Academy Awards; The Guide by Oles Sanin, The Tribe by Myroslav Slaboshpytskiy, which was awarded during the Critics Week in Cannes; an excellent documentary Maidan by Sergei Loznitsa (who is the author of the outstanding films In the Fog and My Joy); and also I’m Femen by Alain Margot, a film about the leader of the Femen group, and film productions of the revolutionary artistic movement #Babylon ’13.

The Guide by Oles Sanin is a story about an American boy and a blind kobzar, who are running from ruthless killers from the Soviet NKVD, set against the horrific Holodomor that was raging throughout Ukraine, in 1930s. As for Brothers — the Final Confession by Victoria Trofimenko, it is an adaptation of the book Sweetness (in Swedish Hummelhonung) by Torgny Lindgren. Instead of Sweden, the director sets the story in the Ukrainian part of the Carpathian Mountains, where two helpless old men, who are also brothers, desperately indulge themselves in competing with each other, in an effort to prolong their lives. The Tribe by Miroslav Slaboshpytskiy won three important awards, during this year’s edition of the Cannes IFF. It is a fascinating film in which not a single word is spoken. The reason for it is the story set in a special boarding school for deaf-mute, where we find the main protagonist, Sergei. He soon becomes a member of a school gang — the title Tribe — but falling in love with the Boss’ girlfriend puts his life in danger.

The Ukrainian section will also include film productions that offer a “live” commentary to the Ukrainian revolution that started at the end of 2013 with massive street protests on Maidan — the central square in Kiev. The first of them is a documentary Maidan by Sergei Loznitsa, which the “Variety” magazine referred to “as one of the very few films about the latest revolution in Ukraine to be valid in the span of five or ten years.” The article emphasized the masterly capturing of moods and emotions dominating the protest against the pro-Russian president Yanukovych, from euphoria to tragedy. The #Babylon ’13 artistic collective chose YouTube as the tool in their film struggle. By making use of social media, they intend to appeal to the needs of the Ukrainian generation born after 1990, who are “the driving force behind this civil protest”, according to the group’s manifesto. I Am Femen by the Swiss director Alain Margot touches the phenomenon of Femen, a women’s social movement from Ukraine. Everybody in Europe is familiar with its woman activists, who fight for the freedom of speech and democracy, protesting with slogans written on their naked breasts. The heroine in the film is Oksana Shachko, co-founder of the movement, who has come a long way from her initial plan to become a nun, to organising topless protests on big European squares.

One of the most significant components of the Ukrainian section of TOFIFEST is a discussion about the future of Ukraine, with particular attention paid to the perspectives of development for Ukrainian culture and cinema. The following people have — among others — confirmed their participation: Olena Fetisova, director of Paradjanov, which is included in the ON AIR main competition at TOFIFEST, the afore-mentioned Oksana Shachko from Femen, and Larisa Artiugina, who represents Babylon ’13.

The discussion will take place on 23rd October, at the Festival Centre (Od Nowa Centre).