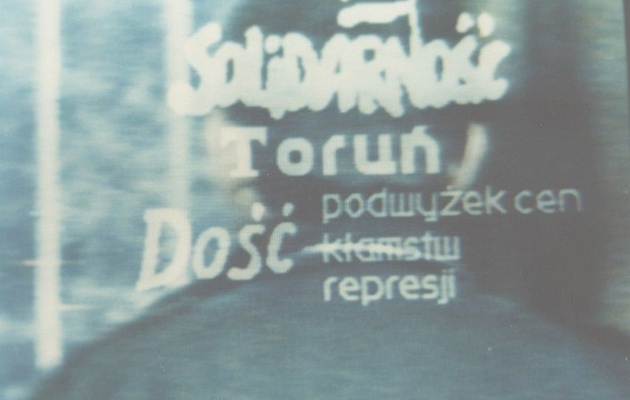 On Sunday Toruń will host the Polish premiere of the long-awaited film about “hackers” from Toruń Solidarity – “Hackers of Freedom.” Marcin Gładych, the director, adapted an incredible story of hacking the antenna of the Communist television by several scientists from Toruń’s underground. It happened during the broadcast of news in Autumn 1985, which made the secret police mad.

This film has been discussed for several months. Entire film environment of Toruń was involved in the production of the documentary. Eventually, it is! On August 29, a preview will be held in “Bydgoszcz Kluczyki” club. The official premiere will take place a day later, on August 30 at “Centrum” Cinema in the Centre of Contemporary Art in Toruń. The organizers want to combine the screening with a charitable activity, so everyone is invited to bring a small gift for the students of the Future Adacemy project – the children who are raised in difficult conditions and every day experience school failures.

“Hackers of Freedom” is a film about the first Polish “hackers” – scientists from Toruń’s “Solidarity”. The director is Marcin Gładych, a photographer and filmmaker. The film consists of interviews with the heroes of the story and is complemented by feature reconstructions, archive footage and animation. Shots for the “Hackers” were taken in blocks built in the 80s. Some of them were carried out in the flats, the search of which was brokered by the Tofifest festival.

The legendary action took place on September 14, 1985. The initiators of this daring act were the scientists of Toruń university – an astronomer and opposition activist Jan Hanasz and mathematician Grzegorz Drozdowski. The broadcasting equipment was set up in the flat of the secretary of the Institute of Physics Elżbieta Mossakowska. The electronic system they built broadcast TV signals synchronized with the signals from the state television transmitter. Thanks to this they “broke” in the middle of the main regime news — “Dziennik Telewizyjny.” They issued two slogans: “Enough of price increases, lies and repression. Solidarity of Toruń” and “The boycott of the elections is our duty. Solidarity of Toruń.” They were shown on TV screens for four minutes. The signal reached the entire Old Town of Toruń, where there were, i.a., barracks and the headquarters of the Communist Office of Internal Affairs. The whole “attack” was prepared together with colleagues from the universitiy – Zygmunt Tudło, Leszek Zaleski and Eugeniusz Pazderski.

The action of Toruń’s underground was loud even outside the country. According to “Gazeta Wyborcza”, an American journalist Buck Bloombecker called the sabotage, “one of the most spectacular acts of hacking around the world.”

The director and originator of the project, Marcin Gładych, frankly says why he decided to make a film about this event: “This is my manner of repaying the debt I have to those people. When they did it I played bridge and did not bother, and yet they fought a little bit of freedom for our sons” – he explains. Gladych found a history of Toruń’s “hackers” on the Internet. “I was fascinated by the fact that it was a struggle with the intellect, not the street battles and strikes. Those gentlemen professors invented something that intellectually overwhelmed the other side, the Communist one” – said Gładych. As he emphasizes, the compromise of the Communist TV antenna was an unconventional and excellent promotion of Polish science. The “hackers” probably fell because of the denunciation. They were also previously observed by the secret police. After the arrest of four of the five “architects of the conspiracy” their trial began. They were defended, inter alia, by Jan Olszewski who later became the Prime Minister of free Poland.

The film also contains archive footage and special animated reconstructions made in 3D technology. The most valuable of them is the famous message that “hackers” sent through the waves. Its original version does not exist – at that time the broadcast was not registered. Besides, the “attack” was not noticed in capital Warsaw. The scientists came with their message between the central transmitter and the viewers in Toruń. Therefore a reconstruction was needed: “We used the reconstruction, which was made for the needs of his artistic experiments by Igor Krenz, an avant-garde artist, the founder of Film Group “Kino” and a member of the artistic group Azorro” – says Gładych.