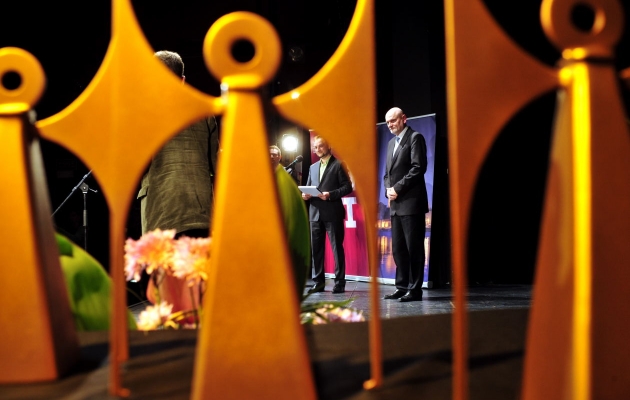 Austrian Kuma by Umut Dag won the Grand Prix of the IFF Tofifest 2012. As for the Shortcut Competition, the winner is Hungary with Beast by Attila Till and My Father’s Bike by Piotr Trzaskalski was recognised as the best film in the From Poland Competition. The guests of Tofifest included Geraldine Chaplin, Krystyna Janda, Zbigniew Zamachowski, Michal Urbaniak, Maria Peszek, Manya Patil, Mohan Agashe and many others.

This year marks the 10th anniversary of the IFF Tofifest that has been created and managed by director Kafka Jaworska. The festival has been nicknamed as “rebellious” and it has been focusing its attention on powerful and ambitious films, for many years. This year’s jubilee edition has been built on the foundation of strong women, i.e. Janda, Peszek, Chaplin and Pam Grier. The winners of the 10th IFF Tofifest were awarded the Golden Angel Awards, on Friday, 26th October.

The chairman of the jury of the On Air International Competition for best full-length debut or second film was a famous Polish actor Zbigniew Zamachowski, and the jury comprised a Romanian director Anca Damian, a Belgian director Rachel Lang, film critic Piotr Kletowski and a Polish director Bodo Kox. The jurors decided to award the Grand Prix of Tofifest 2012 to Kuma by Umut Dag from Austria. When justifying their decision, the jury said: “Kuma uses a peculiar narrative structure, which bring to light surprising, yet very true human relations, in a modern multicultural society.” The film tells a story of two women. It portrays the traditions of a Turkish village, which are cultivated in the heart of Europe – the imperial Vienna – and yet, they are completely incomprehensible for the people living according to the principles of Western European culture. A 19-year-old girl becomes “kuma” (a fellow wife, concubine) of a Turk living in Vienna, whose real wife is dying of cancer. Contrary to their own expectations, this peculiar triangle brings the two women closer to each other. The prize of 20,000 euro was funded by the Local Government of Kujawsko-Pomorskie Province and presented by the Marshal of Kujawsko-Pomorskie Province Piotr Calbecki.

The jury decided to award the prize for the best director at Tofifest to Iveta Grófová from Slovakia, the director of Made in Ash. The jury gave this clarification of their decision: “The directing in the film was uncompromising and brave formally, avoiding any simplifications, when portraying the fate of the main protagonist, who was thrown into the abyss of human degradation.” The Slovakian-Czech film by Iveta Grófová is a rather harshly told story about young Slovakian women, whose life ambitions have been mercilessly destroyed by the brutal reality of New Europe. The prize of 20,000 PLN was funded by Agnieszka Odorowicz, director of the Polish Film Institute.

The Zygmunt Kaluzynski Award for the Best Film Scene was given to Sergei Loznitsa for a scene from In the Fog. The award recognised “an excellent mastershot, which from the very first moment introduces the audience to the film world of Sergei Loznitsa and demonstrates the horror of war in one long shot.” The Zygmunt Kaluzynski Award has been awarded at Tofifest, since 2006 and it is a recognition to a film scene, in which – according to the patron’s own words – “the director was touched by God.”

The jury of the Shortcut International Short Film Competition was composed of Peter Muszatics, director of Ciunegfest Festival in Miskolc (Hungary), Natalia Lesz, actress and singer, and director Kuba Czekaj. They decided to award the Golden Angel to Beast from Hungary. The film was made by Attila Till. The film was awarded for “extremely powerful picture of human humiliation.” The film is set in a remote rural area of modern Hungary and tells a story of inhumane mistreatment of people working on a farm that belongs to a wealthy farmer. The jury also gave a Special Mention to Michael Rittmannsberger from Austria for Punched, which was recognised as a “simple, yet very striking portrait of prejudices.” The prize of 15,000 PLN was funded by Minister of Culture Bogdan Zdrojewski and awarded by Ewa Brzostowska-Izdebska from the Ministry of Culture and National Heritage.

The From Poland Competition was won by My Father’s Bike by Piotr Trzaskalski. The film featured an extraordinary performance by Michal Urbaniak, who was one of the guests at Tofifest. The audience reacted enthusiastically to this wonderful story about the path to mutual understanding and accepting of three men, i.e. a grandfather, his son and grandson. The prize in the From Poland Competition was funded by Royal India Restaurant.

This year’s Special Flisak of Tofifest (also known as the Kujawsko-Pomorskie Film Award) – which is an award of the President of Torun Michal Zaleski – was awarded to a journalist, for the first time. The winning journalist was Szymon Spandowski from Nowosci Daily, in recognition of the work invested into the revealing of the history of cinema in Kuyavia and Pomerania, with a particular focus on Torun. Spandowski revived the figure of a great pre-war film star, Torun-born Helena Grossowna, as well as discovered a pre-war Marwin Film Studio and magnificent films made by Torun-born Boguslaw Magiera (made in 1938 and 1939), presenting them to the modern audience.

The second Flisak Awards was presented to an excellent actor of the young generation, Jakub Gierszal. The actor is famous for his roles in All That I Love, Suicide Room and Yuma. Jakub Gierszal has also been awarded a Special Golden Angel for the Rising Star of European Cinema. He accepted both awards on Sunday, 21st October. Gierszal has been one of the Shooting Stars Berlinale 2012.

On Thursday, 25th October, a Special Golden Angel for Artistic Insolence was awarded to Krystyna Janda, one of the best European actresses. As for the Golden Angel of Tofifest for Lifetime Achievement, it was awarded during the Opening Ceremony, to Geraldine Chaplin, a great actress of international cinema, well known for her roles in The Orphanage, Talk to Her, Doctor Zhivago and films of Saura, Scorsese and Altman.

Awards of the 10th Edition of the IFF Tofifest 2012