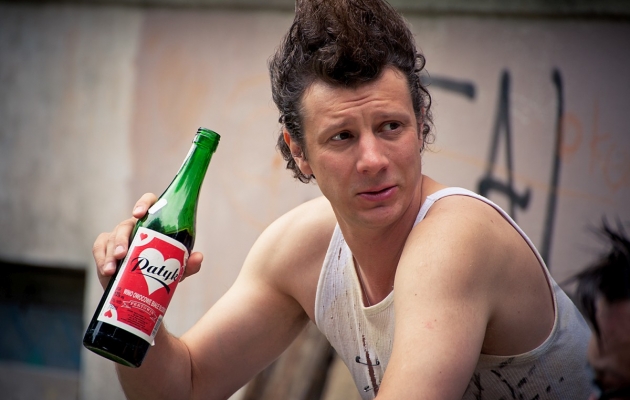 Beavers is the name of a punk rock band that no longer exists. They released one demo and then disbanded — every member of the band soon forgot about music, their dreams and having a great career. Marcin is on his way back from Ireland and decides to end his life feeling that it is a failure. An unexpected event stops him from suicide – he finds an announcement, in which someone if offering his old guitar up for sale. Marcin decides to get it back and reactivate the band. He starts looking for his former band members: Klocek (Block), who makes a living by selling psychotropic medications taken straight from a psychiatric hospital, and Smród (Reek), who has taken over family business and runs a public toilet… We are simultaneously watching dark harvesters, who are personified in Beavers as corrupted clerks, who make sure that papers are in order. Marcin’s suicide attempt has made it on the list of the Reaper, who is a degenerate personification of Death himself that drives a black hearse and is quite a bibulous fellow — he will do whatever he can to lead the boy to his death.

Hubert Gotkowski was born in Rzeszów, in 1981. He is a M. Sc. Eng. in computer science (a graduate from the Rzeszów University of Technology) by profession and a filmmaker by vocation — he is a film director, screenwriter, editor, and co-founder of the DDN film group from Rzeszów. His films were awarded at the most important festivals of amateur and independent films.