Get infected… with cinema! 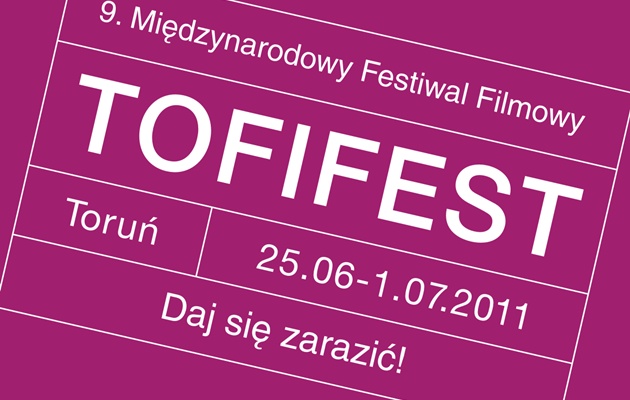 This is the official motto of the forthcoming 9th edition of International Film Festival Tofifest, which begins on June 25th in Torun. The movie contest reported a record number of more than 1000 titles from 63 countries all over the world. This year’s edition will have a totally new poster of young artist from Torun: Matylda Mazur.

9th edition of the festival set its sights on letting “positive movie virus” into bloodstream of Polish culture. Of course, the virus will be very “rebellious”, like the whole Tofifest. Rebellion is the ideological backbone of the Festival, it is the courage to show unconventional artists’ works, still unknown cinematography, surprising combination of different essences of Tenth Muse — says Kafka Jaworska, Tofifest’s director. And adds: It is our inborn creative anxiety which makes us unique. We are not a product of the festival, but a natural ‘handmade’ festival. From beginning to end.

The festival of Torun, which is called “rebellious”, focuses on cinema dealing with the debate about the modern world and human-being. This year to the three festival's contests — full-length ON AIR, short SHORTCUT and Polish FROM POLAND, 1051 movies from 63 countries worldwide were reported. Thousands of euros are waiting for the winners. In the main competition for the Tofifest’s Golden Angel — ON AIR, the “bank” is 10000 euros: 5000 for the best director and 5000 for the best picture. The awards were sponsored by the Director of the Polish Film Institute: Agnieszka Odorowicz and Marshal of the Kujawsko-Pomorskie Province: Piotr Calbecki. However, the best news wait for the short competition winner. This year the festival would award the highest prize in the history of this competition — 15000 zł funded by the Ministry of Culture and National Heritage: Bogdan Zdrojewski.

New edition “is in the company” of a new poster and graphic design, which will change festival’s informal logo: “The Tofifest’s Orange”. This orange has already been squeezed and cut on Tofifest’s posters. This year the festival takes the peeling literally, like a cinema: to the limit. The creator of the projects is — as befits a festival that consequently promotes debutants — the debutant Matylda Mazur. The poster can be viewed on the festival’s website and the festival’s Facebook.

This year’s program of the Tofifest consists of not only competitions but national retrospective, presentations of the chosen masters of cinema, masterclasses and discussion panels. The current projects, such as forum for cooperation among festivals in Central Europe “Cultural Exchange” organized together with the Visegrad Fund or creative incubator for a local film “Locations”, created since the beginning of Tofifest, are also taken into the consideration. That is the only section in Poland devoted to film-makers from the region. Tofifest also awards the country's oldest regional cinematography prize — Flisak — given by the President of the Torun: Michal Zaleski. Among the winners there are: Magdalena Czerwińska [“Wojna Polsko-Ruska”], Olga Bołądź [“Skrzydlate świnie”], Maciej Cuske [“Kuracja”], Rafał Kapeliński [“Emilka płacze”] and Tomasz Szafrański [“Naznaczony”, “Nowa”]. During the festival the special Golden Angel for the Artistic Rebellion will award an outstanding film-maker. So far Janusz Gajos and Boguslaw Linda are the ones who have received it. Tofifest Festival earned a reputation for event promoting non-stereotyped auteur cinema, not indifferent and non-obvious movies.

Sale of festival passes, which can be bought from 30 May with 30% discount has already started.

Festival’s movie shows will begin on June 25th in Baj Pomorski Theatre. The final will take place on July 1st in Center of Contemporary Art in Torun, the most modern Polish building of this type.

Honorary Patrons of the festival are: