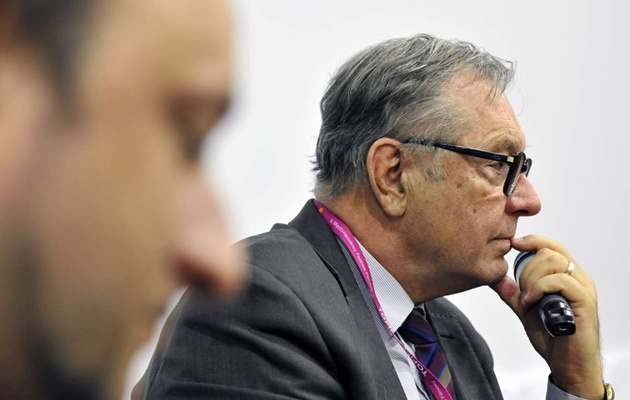 Meeting with Lech Majewski, director of the film „Młyn i krzyż”

„Młyn i krzyż” is one of the the most known and the most original film production for the last few years. The whole idea is taken from the Dutch painter Pieter Bruegel entitled „Droga krzyżowa” („Stations of the Cross”). The director, Lech Majewski, fascinated by his art decided to present the reality of this one moment enchanted in the image. The public of Tofifest will not only to see the movie, but also to have an opportunity to meet with director and ask him about the project.

Film aroused strong feelings due to its theme. Lech Majewski told about it:

Film was made as an order by the numerous museums. I don’t think it required the courage. This painter is very close to me for a long time. The essence of his image is multidimensional perspective. It’s common for antique painters — they invite us to their world. In contrast to the modern art that is stupid and empty. The modern art doesn’t encourage us discover it but screams and yell at us and tries to shock. That’s why I think that we are into the crisis of the art. While making this film I heard the people from the Bruegel’s painting. They are talking to us, in contrast to those stains. Nevertheless the antique masters didn’t have technical possibilities as we do, they were brilliant and modest. We are the society that is completely rotten. Bruegel’s phenomenal, he presents entire world’s tragedy in one painting. He discovers the meanings, creates symbols. In contemporary world the human being is so superficial.

Next questions were about the newest ways of realisation like those from „Młyn i krzyż”.

Its editors used the newest technique CGI taht was used also in production of „Avatar”, or „Pirates from Caribbean”.

— Making this film in studio in Warsaw we had much worse possibilities than the other film makers. We were still dreaming about the Hollywood. Then, when I showed the film to Retford, the technicians from „Avatar” came to me and congratulated me the visual part of the movie. That was incredible.

The public asked also about the way of interpretation of the image. Lech Majewski said that the clue is to understand the picture of Bruegel.

— Bruegel didn’t focus on the protagonist. He wanted to show that the most important people of the world’s history are those who are invisible in day-to-day life. My main goal was to meet with Bruegel. I wanted to talk to him and to learn something. And I did it.

In 2007 was the premiere of the film by Krzysztof Zanussi, „Il Sole nero / Black Sun”. We could have seen it in Poland from the 1st of April. We couldn’t miss it in festival’s program. Film is based on the theatrical play by Italian writer Rocco Familiari, friend and coworker of Zanussi. Film tell the story of ideal love of two young people whose happiness is taken away. After the secret murder of a husband, his devastated wife decides to find the murderer and to punish him. Film was made in Italy which gives it this specific atmosphere. Asked about the theme, the director explained:

— It’s hard to live in the world where the evil is not being punished. In Italy everyone knows that even for the most serious crimes one gets max. 7 years. Where is justice, the pain of the victims and their harm? In that situation one needs the opportunity to punish and get revenge that provides to the order and balance in the world. That what this film is about.

Next topic of the discussion was the way of showing the love of protagonists. One person from the public claimed that he emanated of pathos. So that Zanussi said:

— We don’t tell stories about great love. The most popular are love stories without happy ending, but anyone said that we’re supposed to make only this kind of films.

This type of distance and freedom was visible while answering the questions about working with Doda. (film „Serce na dłoni” from 2008) and to critics’ opinions.

— I can’t even imagine someone else to play this role except Doda. She was excellent, apart from that she’s very talented and hard-working person. Everyone who saw this film knows exactly why this particular role was ideal for her. Speaking of critics, I think that there’s no great criticism in the world of cinema. In that domain the nor evaluation nor the critic’s opinion is not important, but the capacity of seeing the sense and presenting it to the viewers. Nowadays it doesn’t exist. The contemporary criticism ruins the cinema, it doesn’t inspire it.