They deserved it! Katarzyna Nosowska and Marek Koterski were awarded the Golden Angels for Artistic Insolence during the Tofifest International Film Festival 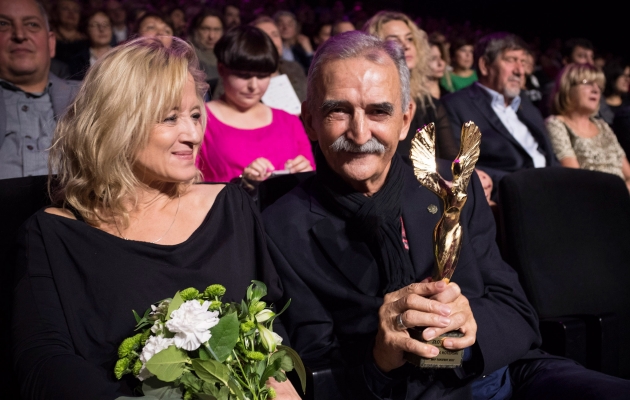 It would indeed be difficult to find candidates worthier of an award for being a rebellious artist, than Katarzyna Nosowska and Marek Koterski. The co-founder of Hey and the director of “Day of the Wacko” received the Golden Angels dedicated to rebellious artists – and awarded by the Tofifest International Film Festival in Torun, the only festival in Europe to give such awards – on Saturday, 21st October. Katarzyna Nosowska added splendour to the Opening Ceremony of the festival, by performing during the “Energy of Film Music” concert.

You are most important to me, because thanks to you I can always find the strength to complete another film, said Marek Koterski, thanking the audience when receiving the award presented by festival director Kafka Jaworska and President of Torun Michal Zaleski.

The director has made such films as “Nothing Funny”, “Day of the Wacko”, or “We’re All Christs”, in which he created the character of Adas Miauczynski, an educated person from Poland, who is weary of life and his constant failures – a somewhat canonical figure in the history of Polish cinema. In other words, a true antihero, and after all the “antihero” is the leading topic of Tofifest 2017.

The “Rebellious Angel” was also awarded to Katarzyna Nosowska. The co-founder of Hey rock band has won the total of 21 Fryderyk Awards, a Polityka's Passport, and many more prestigious awards, but the Angel of Tofifest is certainly the first ever prize she has received in recognition of her artistic independence and the unique position she has on the Polish music scene.

I have chosen for myself a place on the edge of the big world, and I tend to avoid big-scale events, but this award is very important to me – and this is why I am here, said Katarzyna Nosowska.

The Power of the “Energy of Film Music”

The culmination of the Opening Ceremony was a powerful dose of energetic music. The “Energy of Film Music” brought interpretations of popular film music themes performed by O.S.T.R., Krzysztof Iwaneczko, Joanna Czajkowska-Zon, and winner of the Golden Angel Award Katarzyna Nosowska.

The concert also featured the performance of Steve Nash, a three-time DJ World Champion of the International DJ Association (IDA), and the entire event was prepared and musically supervised by Bartek Staszkiewicz, a musician and music producer, and a winner of the Fryderyk Award (together with his band Sofa).

During the coming 9 festival days, you will have an opportunity to see more than 170 films from more than 50 countries. The festival will end with an original music production by Tofifest: a concert under the title “Music is a woman”. The 15th edition of the Tofifest International Film Festival will take place in Torun, from 21st October to 29th October, 2017.