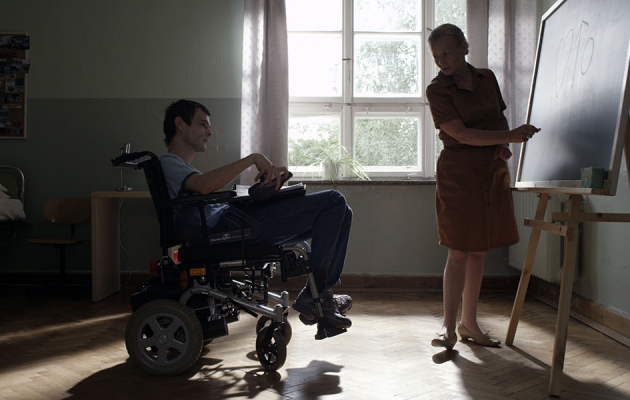 12 brand new Polish films will be featured in the From Poland competition, during the Tofifest International Film Festival that starts on 21st October. They will include the subtle Ida by Pawel Pawlikowski, the controversial In the Name Of… by Malgoska Szumowska, and the rebellious Viva Belarus! by Krzysztof Lukaszewicz. The best of them all will be awarded the Golden Angel of Tofifest, by the festival’s audience.

However, one is bound to start this presentation of Polish films with Life Feels Good by Maciej Pieprzyca. The film is inspired by true events and tells a story about Mateusz, a disabled person with a brilliant mind, who was portrayed daringly by a duo of actors – Dawid Ogrodnik and a phenomenal novice Kamil Tkacz, who plays the younger Mateusz. The film was recognised at one of the most prestigious film festivals in the world – the Toronto IFF – where it won, among others, the Main Prize.

On the other hand, Ida by Pawel Pawlikowski is one of the films most anticipated by the audience. This is a Polish, Danish, and British co-production, which has recently won the Golden Lions at the Gdynia Film Festival. It is a subtle, black and white story about a girl, who wants to become a nun. Prior to taking her vows, she goes to visit her aunt, following an order of the Mother Superior. Soon after, the nun-to-be and her aunt take a metaphorical journey to discover, who they really are.

Flying Blind by Katarzyna Klimkiewicz – who has already won the Golden Angel of Tofifest – tells a fascinating story about a toxic love relationship. The film won the Main Prize at the “Young and Cinema” Festival in Koszalin. During the very same festival, as many as five awards went to Warsaw Stories, a film directed by five debuting directors: Maciej Cuske, Kacper Lisowski, Nenad Miković, Mateusz Rakowicz, and Tymon Wyciszkiewicz – all five of them will be present at Tofifest.

As for To Kill a Beaver, it is a film with a unique plot. The director Jan Jakub Kolski filmed it himself, using a digital camera and the money raised by his friends. Eryk Lubos, who portrayed the main protagonist, was awarded the Best Actor Award at the Karlovy Vary International Film Festival. Unfortunately, the film has no distributor and cannot be screened in cinemas.

The From Poland competition will also include Imagine by Andrzej Jakimowski. The film was shot in Lisbon and it is a metaphysical story reminding us that being close to each other is based on the discovering and building a common world. We also recommend paying attention to Loving. Film by Slawomir Fabicki, or the controversial In the Name Of… by Malgorzata Szumowska, which won awards in Berlin and Gdynia. The latter is a story about an impossible homosexual love affair, which involves a priest, set in the reality of a Catholic community, deep in the Polish provinces.

Viva Belarus! by Krzysztof Lukaszewicz presents a 24-year-old musician from Belarus, who fights the repressive regime of Alexander Lukashenko, risking everything he loves. The main protagonist is portrayed by Dzmitry Vinsent Papko, a Belarusian, who has experienced serious problems in his country, as the authorities in Belarus are very unhappy about the significance of the film. Both Papko and Lukaszewicz will be guests to Tofifest.

The competition is going to close with Baby Blues by Katarzyna Roslaniec, which features a daring performance by Magdalena Berus (both ladies will have a meeting with the audience of Tofifest), the ephemeral Lasting Moments by Jacek Borcuch, featuring Kuba Gierszal, winner of the Golden Angel of Tofifest, in the main role, and the shocking portrait of the Polish police force in Traffic Department by Wojciech Smarzowski, who will also be a guest to the festival in Torun.