Smarzowski: “I want to provoke” or the fourth day of Tofifest 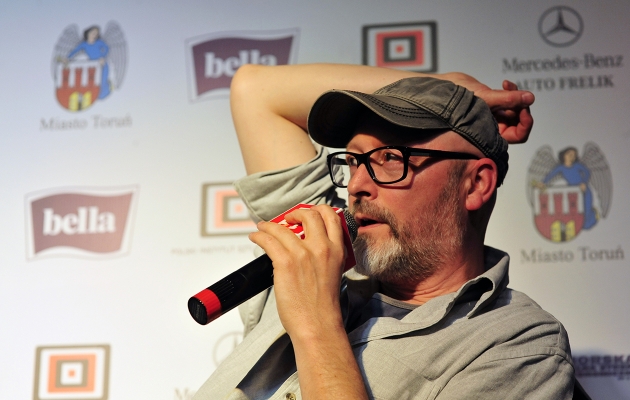 The Thursday at Tofifest was marked by film screenings, a discussion about the right to download films from the Internet, and meetings with interesting guests. The audience had an opportunity to meet with Maciej Pieprzyca, Martin Sulik, Krzysztof Lukaszewicz, and Dzmitry Vinsent Papko. And last but not least, two competitions were completed, namely Shortcut and Localisations.

The ON AIR competition featured Frances Ha from the USA, directed by Noah Baumbach – a black and white independent comedy and a modern fairy tale about New York. The other film presented on Thursday, as part of the main competition, was the Dutch Matterhorn by Diederik Ebbinge. This is a story of a lonely widower, who one day takes in a homeless tramp, set in the atmosphere of puritan provinces in the Netherlands. This results in rumours spreading all over the small town – some of them even suggest that the two men have developed a homosexual relationship. The retrospective of Colombian cinema included two films: The Car by Luis Orjuel and The Hidden Face by Andres Baiz.

One of the events that created a very heated atmosphere on Thursday was the discussion under the title I download, because I like it. A discussion about downloading from the Internet. The participants included film critics, PR experts, and representatives of Fundacja Legalna Kultura (Legal Culture Foundation) and Fundacja Nowoczesna Polska (Modern Poland Foundation). Film critic Tomasz Raczek was invited to participate in the discussion, as a special guest. On Thursday, there was also a Masterclass with Martin Sulik, who was a special guest to Tofifest.

Jurors watched the last films in the Localisations and Shortcut competitions. As for the From Poland competition, the audience watched the latest film by Jan Jakub Kolski To Kill a Beaver, and Viva Belarus! by Krzysztof Lukaszewicz. The latter of the two was followed by a meeting with director Krzysztof Lukaszewicz and actor Dzmitry Vinsent Papko. Maciej Pieprzyca – director of Life Feels Good – was another director that had a meeting with the audience.

Now, let us take a closer look at the meetings on Wednesday. Martin Šulik, one of the most outstanding and award-winning film directors from Slovakia, was a special guest to this year’s edition of the Tofifest International Film Festival. The director was awarded the Golden Angel for Lifetime Achievement. During the meeting with the audience, the director discussed the real story behind his latest film (Gypsy, 2011) and the condition of Slovakian cinematography, and also his film tastes. The issue of contemporary Slovakian cinema was also raised, during the meeting. According to Šulík, Slovakian cinema was slowly recovering from the collapse caused by political changes that happened at the end of 1980s, and the beginning of 1990s. The director commented: “I have a feeling that something is changing in our society. Slovakian films are awarded at festivals and young Slovakians enrol into film schools, because they feel that there is still something to do.”

When asked about his favourite directors, Šulík mentioned Andriej Tarkovski, representatives of the Czechoslovak New Wave, and Krzysztof Kieslowski, to name just a few. Furthermore, the director made a comment about the impact that Polish cinema from 1970s and 1980s made on him: “To be honest, it was Polish cinema that made me reach the world of films, in general. When I started to become interested in cinema, I was inspired by Andrzej Wajda’s films, and the cinema of moral concern.”

The guests to the festival could not fail to include Wojciech Smarzowski, who is considered one of the best contemporary film directors in Poland, and referred to as the master of controversy. Smarzowski explained the source of inspiration for his latest film Traffic Department. A few years back, the director recorded the work of police patrols and it made him realise that the material was worthy of a film. To the majority of the people that saw the film, Traffic Department is a shocking film that stirs up extreme emotions. As to Smarzowski himself, he saw it differently: “It was a light subject for me and I decided to take it on, in an effort to relieve the stress built after my previous film, Rose.” When asked about the concept behind Traffic Department, Smarzowski replied that it was not a film about traffic police: “This is a film about a helpless country, which cannot enforce its laws.” According to Smarzowski, the goal of the film was to provoke a discussion among film viewers and stir their emotions.

During the meeting, the director shared some general reflections on his film work. When asked about the values he wanted to promote in his films, the director replied: “I am very far from propagating any values. I’d rather throw shit into a fan, because I just intend to provoke.” After the meeting, the director shared his planes for the years to come. The next film he has in mind will be neither light, nor pleasant. Wojciech Smarzowski intends to make a film about the massacres of Poles in Volhynia and Eastern Galicia.

Warsaw Stories is a film unlike any others. It was not filmed by one, but by as many as five different directors, three of whom – Tymon Wyciszkiewicz, Mateusz Rakowicz, and Maciej Cuske – had a meeting with the audience at Tofifest. Warsaw Stories is a film comprised of five short films that are interconnected, set against the background of contemporary Warsaw. First and foremost, this film project discusses the problems of people lost in a big city, and tries to create the portrait of a modern man. The framework for all the stories is the twists and turns in the life of “Igła” (Polish for “Needle”), portrayed by Eryk Lubos, and it is the theme that opens and closes the film. “I have to honestly admit that we had a great time working on the film. Before we started working, we perceived the film as the Many-Headed Hydra that no man could tame, but we were successful. This was the most important project for us. We could not avoid many discussions and even quarrels. It’s true we had all that, but the goal behind them was to make a better film,” said Tymon Wyciszkiewicz. The Warsaw they have portrayed is a complex and very sad city. The intention of the directors was to show the true face of the capital city – a merciless metropolis always in a hurry, cruel to all those, who struggle to survive. It is a city, where people feel alone in the crowd, and those who come there for money find it very difficult to build relationships based on sincere confidence, honesty, and closeness.

How much of an investigator is there in every journalist? It seems that quite a lot. This was the subject discussed during the Grey Matter meeting that took place on the third day of the festival. The meeting was dedicated to the connections between literature and cinema, and it featured the premiere of the book “Imperator” (Emperor), a biography about father Tadeusz Rydzyk. The authors Piotr Gluchowski and Jacek Holub discussed the criminal themes that accompanied their work on the book. The meeting with the authors of “Imperator” turned out to be a very colourful story about the work of a reporter, who asks questions that no one wants to answer. The authors revealed the true story behind their work and talked about the attempts to get closer to the inaccessible Father Director. It was a very interesting experience to hear about clandestine meeting with informers, or the dislike of father Tadeusz Rydzyk for journalists of Gazeta Wyborcza.