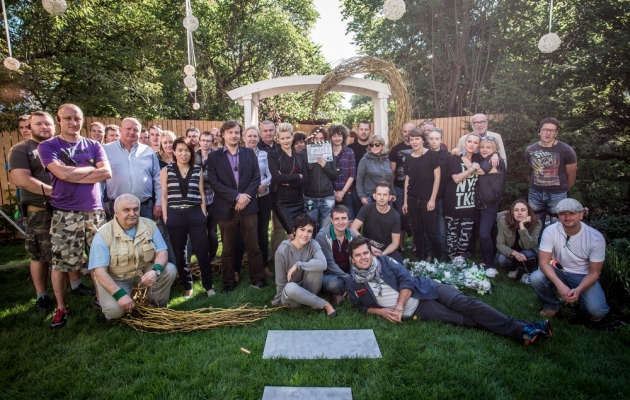 The film is directed by Marta Plucińska, which is also the author of the screenplay. And in the starring Olga see Bołądź, Rome Gąsiorowska, Aleksandra Popławska and Magdalena Lamparska. The new production will return to the big screen as the star, whose name has long been electrifies the media and fans - Margaret Kożuchowska.

"LOVE" is a story about four girls from the big city who want a romantic feel dizzy ... and are ready for any madness - even to escape before the altar.
- It's a film in which every woman will find something familiar - a fragment of myself. It's just a piece of "women's world". There is no contrived story of the cosmos, but the story about modern girls, which can be found in every city - reveals Marta Plucińska.- Each of the characters is different, has a different idea of ​​life, but they are united friendship - and the fact that the dream of true love . As every one of us.

Producer of the film - Paul Pluciński- admits that casting was an extremely difficult and lasted eight months.

- Great, that in the end we were able to collect as many stars on the set. This is one of the best Polish actresses. They have amazing talent, a true "sixth sense" which is activated when the only face Kamera- says Paul Pluciński of the company Federico Film. -. It's obvious that these girls are friends and understand without words. And we wanted precisely in the fact that between the main characters was a real "chemistry".

- Photos begin in Warsaw, but soon the team will move to Plock. We chose this city because of the beautiful landscapes, and for this to Plock pier nakręcimy also one of the two weddings film that viewers will see on the screen - adds a Manufacturer.

Who will play the groom? This manufacturer has not yet released. It is known for being both weddings will prepare Catherine Aspire Gajek from the company that every day organizes weddings Polish celebrities (including footballer Lucas Podolski, Catherine and Margaret Zielinska Kożuchowska). Costumes for the film, including a stunning wedding gown, designed Magdalena Arłukiewicz's studio - "hot" Polish last name of fashion.

The result of their work the audience will see in the spring of 2016 - when the "LOVE" is slated for release in Poland.