The (im)modest Jan Peszek in Torun. A meeting at Tofifest 2015 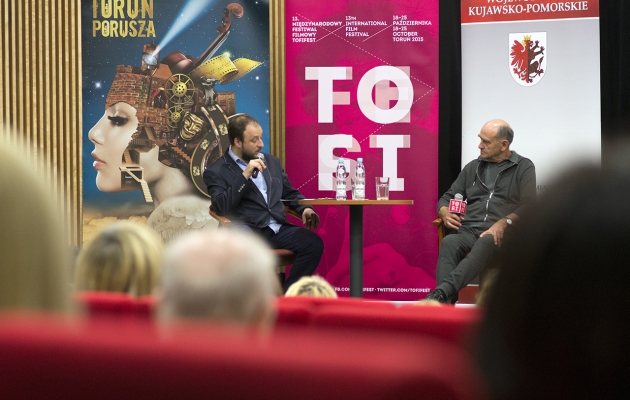 He is a versatile artist, an adorer of unconventional characters, and a workaholic with a passion for nature and harmony – and he is also the one to offer us the first portion of the festival's cake, thus opening the series of meetings with masters.

It is me, a rather modest type of guy...

It was a rainy afternoon on Sunday, at noon, when the Centrum Cinema played host to a visit of a total artist, a celebrity of this year's edition of the festival – Jan Peszek. He has also been awarded the Golden Angel for Artistic Insolence, during the Opening Ceremony of the festival. He commented on the occasion in the following way, thus emphasising the ambivalence of the whole situation: 'I believe that being a rebellious artist is supposed to be a confirmation of the meaning of what we do artistically, although I see myself to be the opposite, quite a modest guy. I am particularly humble, when it comes to acting, which I see as a way to solve a complicated riddle that has never been analysed completely, i.e. understanding the nature of man in its totality.'

All the colours of the rainbow

In addition to discussing the subject of acting, Jan Peszek commented on the issue of Polish patriotism, quite serious and delicate topic. When asked about Hiszpanka (Influenza) by Lukasz Barczyk, he replied that the most significant declaration he uttered in the film was the following sentence: 'I want Poland to be red and white, just like strawberries and cream.'

The sentence is quite colloquial, but reflects the painful reality of the Polish mentality, when it comes to patriotism. Poles are living in the past and keep coming back to what's already passed, thus being unable to focus on the present. We should be enjoying life and independence, instead of becoming ascetics of the ever-combating and ever-tormented Poland.

The main thematic axis of Tofifest 2015 is the 27 Club. Thus, the leitmotif of the festival is a question, whether show business is responsible for the destruction of the artistic psyche and sensitivity in young people. When confronted with the question, Jan Peszek concluded that show business was uncompromising and had a no-holds-barred attitude, but still interesting, regardless.

Although living a turbulent and busy life, Jan Peszek manages to find time for some leisure and breathers. He knows how to stop running, recharge his batteries, and prepare himself for challenges to come. He is currently involved in preparing for successive projects, both in cinema and on stage.