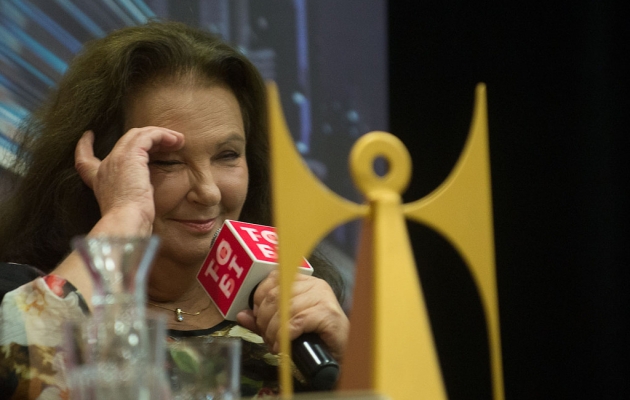 Extraordinary guests and excellent films. To top all that, a fierce debate. It was a beautiful Wednesday at Tofi.

All those, who were waiting for a meeting with Robert Wieckiewicz, did not leave disappointed. He is a brilliant film and theatre actor, winner of the Best Actor Award at the Gdynia Film Festival, known for his performances in The State Witness or Courage, and many others. This year, Wieckiewicz played in the debut film by Jerzy Zielinski, King of Life, and the meeting with the audience followed the screening of the film.

Another of our special guests to this year's edition of the festival was Anna Dymna, who also had a meeting with the audience. She is a film and theatre actress, charity worker, and founder of the 'Against the Odds' Foundation. Anna Dymna is a unique woman, who inspires a great many people in Poland. She came to Torun to accept a special Golden Angel for Artistic Insolence.

One of the highlights of the day was a debate titled "Should we fear Islam?". The following people participated in the discussion: Yosef Baraki, Artur Zaborski, Paweł Lisicki, Agata Pospieszynska, and Natalia Waloch. The debate was preceded by the screening of Mina Walking, a film by Yosef Baraki, presented at this year's Berlinale and nominated for the Crystal Bear. It is a story about Mina, a 12-year-old girl, who is a street seller. The raw cinematography based on lukewarm colours exposes the tragedy behind premature coming of age, and the struggle for survival in a world full of danger and risk.

The Centrum Cinema was visited by Marcin Bortkiewicz, who talked about his Walpurgis Nacht, while producer Mariusz Wlodarski about The Here After by Magnus van Horn.

There were also meetings with a number of talented filmmakers from Kujawsko-Pomorskie. Among others, there was an opportunity to talk to Andrzej Cichocki, a film director and cinematographer, who set his short film Supernova in the reality of Torun and Grudziadz. We were also joined by Karolina Ford, a young filmdirector and photographer, who talked about her latest film Przeswity, and by Mateusz Bulawa, an even younger filmmaker, who discussed his When it comes to me to leave this world.

The film programme for Wednesday at Tofifest included such excellent film propositions, as the Romanian Aferim! dir. by Radu Jude, Viaje dir. Paz Fábrega from Costa Rica (included in the competition), and also a film that we already know, but which is still intriguing – Performer by Lukasz Ronduda and Artur Sobieszczanski.