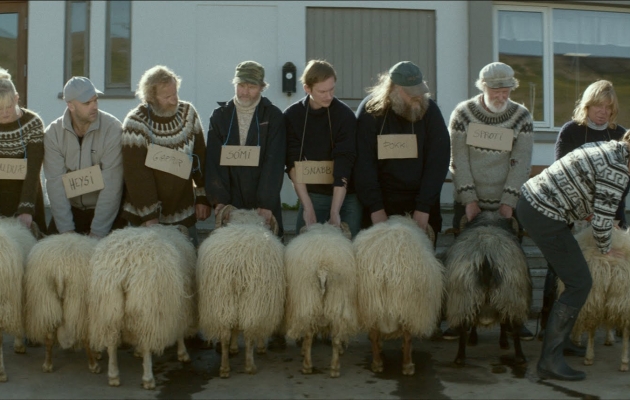 Grand Prix – the Golden Angel of Tofifest – flies to Iceland. The awards of the 13th edition of the Tofifest International Film Festival in Torun were given on Saturday (24th October 2015), during the Closing Ceremony. The winner of the ON AIR main competition turned out to be Rams by Grímur Hákonarson. The other awards given in international competitions were given to filmmakers from Colombia, Costa Rica, Israel, and Great Britain.

The decision to make Rams by Grímur Hákonarson from Iceland the winner of the main competition was made by the international jury, unanimously. This year, the most important of all the Tofifest awards have been given both to the producer and the director of the winning film, for the first time in the festival's history. The two awards have been funded by Marshal of Kujawsko-Pomorskie Piotr Calbecki and President of Torun Michal Zaleski. The Silver Angel for the best director went to the Colombian film director César Augusto Acevedo for his Land and Shade (La Tierra Y La Sombra). The award has been funded by the director of the Polish Film Institute Magdalena Sroka. The Young Jury of the ON AIR competition have rewarded Viaje by Paz Fábrega from Costa Rica.

The award in the SHORTCUT competition of short films went to Ten Buildings Away (Asara rehovot Mea Etsim) by Miki Polonski from Israel. The award in that competition was funded by the Minister of Culture and National Heritage Malgorzata Omilanowska. A special mention in the SHORTCUT competition was given to a very original British animation, The Bigger Picture, by Daisy Jacobs. The winner of the FROM POLAND competition of Polish films was Karbala by Krzysztof Lukaszewicz. The award was accepted by the producer of the film Wlodzimierz Niderhaus from The Warsaw Documentary Film Studio. The winner of the Golden Angel Award in the LOKALIZACJE competition was Ryszard Kruk for his Ziggy Dust.

A special Golden Angel for an Outstanding European Artist was presented to an extraordinary French film director Anne Fontaine (Coco Chanel). A few days earlier, special Golden Angels for Artistic Insolence had been given to Jan Peszek and Anna Dymna, during the Opening Ceremony and in the course of the festival, respectively. The Golden Angel for a Rising European Talent was given to a Kurdish film director, Umut Dag, who lives and works in Austria. Umut Dag was also a member of this year's jury. He was also the winner of Tofifest 2012 with his Kuma. There was also a decision to award the second Flisak of Tofifest Award. It went to a star of German TV, Anna (Anja) Antonowicz, who was born in Wloclawek. The first of the two Flisak Awards went to actor Pawel Tchorzelski, during the Opening Ceremony.

This year, the Tofifest Film Festival from Torun, which is known as a “rebellious festival”, offered an excellent film programme and made sure that the audience and all the guests experienced a truly great festival atmosphere. It was acknowledged by calling the film event in Torun “the coolest film festival”. Tofifest presented more than 150 films, divided into 14 sections, among which there were many Polish premières. Our guests included Joe Pantoliano (Matrix, The Sopranos), Julian Sands (A Room with a View, The Killing Fields), Robert Wieckiewicz, Katarzyna Figura, and many others. The 14th edition of the festival will take place in October 2016.

The primary patron of the festival is the City of Torun. The event is financed from the funds of the Kujawsko-Pomorskie Regional Government, the Polish Film Institute, the Ministry of Culture and National Heritage, and the Creative Europe programme – MEDIA component. The primary sponsors of the festival are TZMO S.A. and Bella.

Statutory awards of the Tofifest IFF 2015