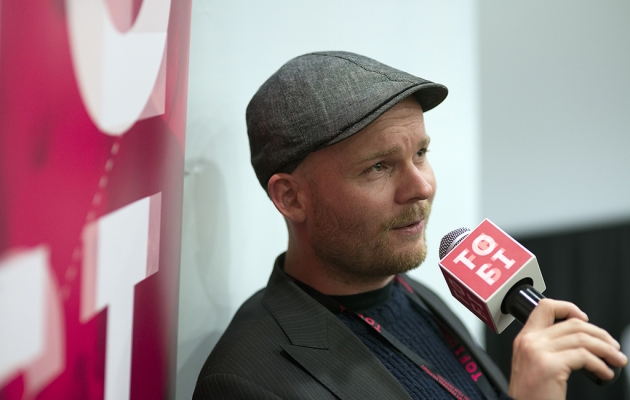 The Icelandic film director Grímur Hákonarson was present in the flesh, while the Swedish filmmaker Magnus van Horn was represented by his film and its producer Mariusz Wlodarski. Both directors confronted the audience at Tofifest with two very different, but also intuitively quite similar, Scandinavian perspectives on cinema.

Are we all capable of committing a crime, given appropriate circumstances? Mariusz Wlodarski, producer of The Here After (winner of three Golden Lions at Gdynia Film Festival), tried to answer the question, during the meeting at Tofifest. The inspiration for the film came to director Magnus van Horn, when he got hold of a footage from an interrogation of a boy, who had killed his girlfriend. The boy was from a normal home, without any history of pathologies, poverty, or mental disorders. He was also born in a town similar to the home town of the director. That shocked him to the core. Would he also be capable of doing something just as terrible?

'It all boils down to the amount of evil that surrounds you at a given moment. We all have our limits to how much we can take,' said Wlodarski. According to the guest of the festival, one must take into consideration all circumstances, when judging an evil man, although the film did not aim at justifying the crime. 'Tabloids exaggerate deeds, ignoring the context in which they were done,' he added. As if that was not enough, rejection by society that is unable to walk in the shoes of a criminal, is also part of the equation.

Wlodarski strongly opposed the idea of comparing the film work of Magnus van Horn to stereotypical Scandinavian cinema, saying that 'We destroy ourselves with labels that we do not need at all'. Magnus van Horn was born in Sweden, but later moved to Poland, where he started film studies at the Lodz Film School. 'The Here After is a Swedish film made in Sweden, and since certain coldness or minimalism are inherent parts of the films by this artist, one cannot avoid labelling.' It is believed that emotional self-restraint is a distinctive feature of all Swedes. Wlodarski agreed and also admitted that Wieslaw Komasa -- the only Polish actor in the team -- had to restrain his acting palette a little.

The Here After premièred on 21st May 2015, in Cannes. The film tells a story of John, who is released from juvenile detention and finds it difficult to start anew among the people he used to live with. It seems that the crime he had committed in the past will prevent him from ever going back to normal life.

A dog that becomes a postman and sheep casting, a.k.a depressive cinema.

Grímur Hákonarson (on the cover photo) came to Tofifest 2015 with a film that had already been appreciated by film critics. In spring, Rams was awarded in Cannes. In autumn, the film landed in Torun to try and win the hearts of the audience in Torun. It has succeeded, judging by the lively reaction of the audience, during screening. Jury awarded Grimur's movie won Grand Prix Tofifest'2015.

The Centurm Cinema was under serious siege, before the screening. The lucky ones who made it to see the film were greeted by Grímur himself, who wished them to have a good time. 'Rams is an authentic film, made on the basis of stories I know from books or everyday life that I combined together. The only original element I have invented is the dog delivering messages and letters. Everything else is based on facts,' commented the director. The authenticity of the film was top priority for its authors. Consequently, the cast includes real farmers and residents, who play episodic roles. That makes the isolation of people in Iceland all the more visible.

'The film is quite depressive. It shows two brothers at variance with each other, who breed sheep, live in total isolation, and have not spoken to each other in 40 years. It was not easy to get the money needed to make the film, when you give people such a grim synopsis,' said Hákonarson.

In addition to the two brothers, the main protagonists in the film are also sheep. The audience wanted to know, whether it was easy to work with a team of animals. The director surprised everybody with the following comment: 'I realise it may sound false, but it went smoothly with the sheep. They were carefully selected sheep from a special casting for sheep that we had. We had sheep that were afraid of us, but also such that were completely laid back, and we eventually chose them to play in the film. Contrary to popular belief, animals are easier to work with, than children!', he concluded.

Rams will hit cinemas at the beginning of 2016.