Why have we stopped “hearing one another”, as people? We already know the answer. Day 3 at Tofifest 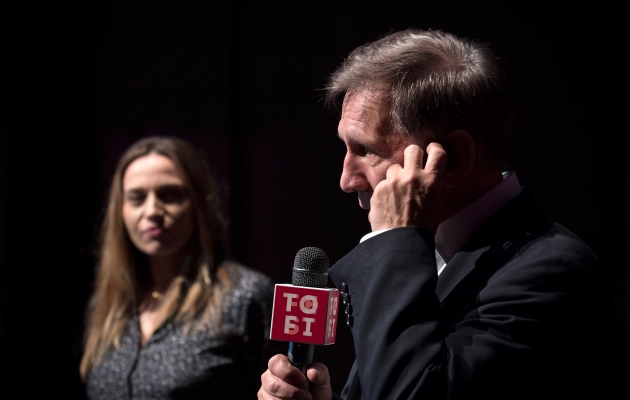 “An artist is a person, who creates the reality, instead of simply entering it.” Jan Englert, winner of this year’s Golden Angel for Lifetime Achievement, spoke these beautiful words during a meeting held at Tofifest. For a change, tonight there will be many questions asked about the oversimplification of cinema. That is exactly the topic to be discussed by the audience and film-makers during The Discussion Club, Essentially, at Tofifest.

Today, on Tuesday, we are going to have Xavier Legrand, author of a fascinating debut – “Custody” – paying visit to Tofifest, and having a meeting with the audience, following the screening of the film. “Custody” is featured in the On Air Main Competition. The audience will also have a chance to meet the authors of “Miracle” from Lithuania, which is also featured in the competition. The authors of the film, i.e. its director Eglė Vertelytė and producer Radka Bardes, are coming to Torun.

Naturally, many enthusiasts of Polish cinema will be interested in meeting Sebastian Fabijanski, a rising star of Polish films, and Jan Kidawa-Blonski, a film director, following the screening of “Gwiazdy/Stars”.

In the evening, there will also be a chance to participate in a special event that accompanies Tofifest, this year. It will be a meeting held by an unofficial forum for exchanging of ideas, which goes by the name of A Discussion Club, Essentially. This time, its creators, i.e. Mateusz Lapinski and Jaroslaw Jaworski, decided to discuss the issue of the growing oversimplification of cinema. During the meeting, there will be a question, whether the oversimplification of cinema addressed to the masses results from laziness, or it is a sad necessity. The meeting will be held in the “Wejściówka” Cafe in the Wilam Horzyca Theatre, and it will be open to all, free of charge.

During one of the meetings at Tofifest, Greg Zglinski confessed that “he touched upon a fringe of the secret of life and death”, when making his latest film titled “Animals” (“Tiere”). According to an account of the meeting provided by Anna Badziag from the Tofifest Press Office, the audience expected the director to offer his own interpretation of the film, after its screening. It comes as no surprise, since the film is a symbolic piece of cinema, full of oblique statements and philosophical riddles. After seeing the film, we are all equally unaware of what awaits us on the other side, wrote Anna Badziag in her review.

Zuzanna Kuffel attended the meeting with Jan Englert, during which he was awarded the Golden Angel of Tofifest for Lifetime Achievement. He is the art director of the National Theatre in Warsaw, famous for his performances in “Kiler”, “Katyn”, “Tatarak/Sweet Rush”, or “Bogowie/Gods”. During the meeting, he concluded that people can no longer talk to one another, because we cannot hear what others say: “All we are interested in is ourselves, while the foundation of life and humanism is the ability to hear one another”. He also offered some important conclusions about the essence of artistry. Jan Englert defined the artist to be a person, who creates the reality, instead of simply entering it. And although he had clearly distanced himself from politics, when talking to the audience, he spoke bitterly about the current state of public life in Poland: Today, everything is built on shamelessness – concluded our guest.

Quite to our surprise, many emotions were stirred up by the screenings of two Polish films. “Wild Roses” by Anna Jadowska inspired the audience to enter into a hot discussion with Marta Nieradkiewicz, who portrayed the main character in the film. According to the report published on the Tofifest blog by Dawid Smyk, the film sparked up a stormy discussion about the provincial patriarchy and the helplessness of women, who face it. I have longed believed that there was nothing that could surprise me in Polish cinema. However, occasionally we see a film that addresses seemingly obvious things, but which are seldom told so emphatically and clearly, to make us understand. I would like to thank you for that, said one member of the audience, thanking the authors of the film.

The discussion that followed the screening of “Son of the Snow Queen” by Robert Wichrowski, which features a brilliant performance by Michalina Olszanska and Franciszek Pieczka’s return to the big screen, lasted for ninety minutes, and ended late in the evening. For that reason, we will offer an account on that meeting in the next portion of news from Tofifest.

A Crisis of the Film Language?

Marek Sofij attended the meeting with two female directors of films featured in the Shortcut competition: they were Laila Pakalniņa from Lithuania, author of “Hello Horse”, and Yi Luo from China, representing Germany in the competition, author of “Night Spinning” animation. During the meeting, we heard some significant words about the crisis of cinema as a means of conveying thoughts and emotions. Laila Pakalniņa said: “While the language of cinema nothing but developed, since the Lumière brothers, it has recently been used mainly as an illustration for other types of media, such as books, comics, or games. And instead of developing and enriching that language, film-makers simply use it.” That conclusion is quite interesting, especially in the context of the meeting of the Discussion Club, Essentially that happens today.

Finally, let us go back to the meetings held on Sunday, for a moment. It is certainly worth reading the account of the meeting with Marek Koterski, this year’s winner of the Golden Angel for Artistic Insolence. Among others, the author of “Day of the Wacko” offered the following comments: I have never been a darling of film critics. It is the audience that carry me on their wings, he said. He also addressed young people present among the audience: It is rebellion and dreaming about being powerful that are the most important things in the life of a young man. Angelika Jasiulewicz provided the account of the meeting.

Adrian Stelmaszyk attended meeting with the artistic family of Smuzny, which was a unique experience, full of emotions. The meeting followed the première of “Smugi” made by Marcin Gladych and Adam Fisz, which is a film story about this famous family from Torun.

All the most important events are published on an ongoing basis, on our Facebook profile.