Sulik: “There are no longer any Romani in cinemas” or the fifth day of Tofifest 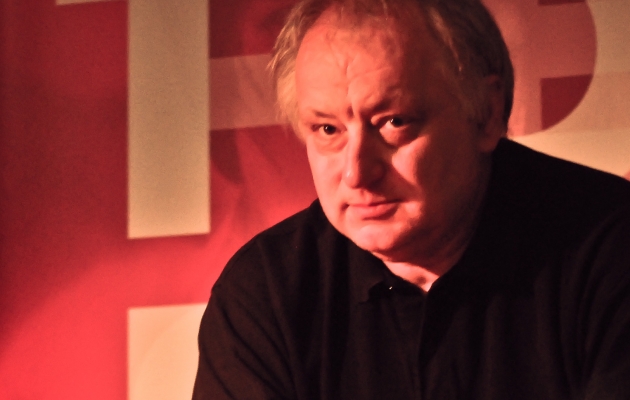 Friday was the fifth day of the festival and it first and foremost marked by the visit paid by Ulrich Seidl. He is a famous and rebellious film director from Austria, who received a Special Golden Angel of Tofifest, during his visit to the festival. The audience also had a chance to participate in meetings with Ulrich Seidl’s actress Margarete Tiesel, as well as with Bodo Kox, Jacek Dehnel and a co-author of the controversial “Floating Skyscrapers”. On Friday, the audience saw some of the last films in the On Air main competition.

The audience met with Ulrich Seidl and his favourite actress Margarete Tiesel directly after the screening of Paradise: Love. It is a part of the “Paradise” trilogy that is considered one of the most fascinating films in modern cinema. Before the meeting, Seidl received a Special Golden Angel for Artistic Insolence.

The most prestigious of all competitions during Tofifest is drawing to a close. On Friday, the audience could see The Rocket by Kim Mordaunt, which was entirely set in Laos, although the origin of the film is Australian. It is a very emotional story about a 10-year-old boy from Laos, who is haunted by a curse. The film shows his struggle with stigma imposed by society. The other competition film screened on Friday was a Polish film The Girl from the Wardrobe, directed by Bodo Kox. The director was a frequent guest to previous editions of Tofifest (he was one of our jurors and a guest) and this year he has also paid a visit to our festival and met with the audience. The Girl from the Wardrobe is considered one of the most outstanding debuts of the season. It is a very touching story about an impossible love, which connects a unique girl and a disabled boy.

Friday was also marked by two important accompanying events. The first of them was the coolest film workshops for children, i.e. Filmogranie. The project is organised by the Sztuka Cię Szuka Association and has been a very successful part of Tofifest for many years, teaching the art of filmmaking to successive generations of children.

The new cyclical event called Grey Matter or Crime Fiction was marked by a meeting with writer Jacek Dehnel – one of the most popular and interesting writers in Poland. Roman Jarosz and Iza Izgel, producers and co-authors of Floating Skyscrapers were among other filmmakers that met with the audience. It is worth adding that the New Romanian Wave section featured the screening of Love Building by Iulia Rugina, which won the Audience Award at the Bucharest International Film Festival.

Let have a closer look at the meetings that took place on Thursday. The fourth day of the festival brought another dose of film emotions: Martin Šulík is one of the most recognised filmmakers from Slovakia, who directed, among others, Everything I Like (1992), which was nominated for Academy Awards in the Best Foreign Language Film category. This year, Sulik has been awarded the Golden Angel for Lifetime Achievement and conducted a Directing Masterclass, concerning the origins and the process of making his last film, i.e. Gypsy (2011).

“When I was a young boy, I would always sit in the second row of seats in the cinema, since the first row was always occupied by Romani. I liked watching films with them, because their reactions were very emotional. When you watched a film in their company, you would feel everything, as if doubled,” recalled Martin Sulik, when starting his lecture. After a while, he added: “Romani are no longer seen in cinema, because they cannot afford it. You can’t find them in cities and all you ever hear about them is in the news.” According to him, the reason behind his decision to make a film about the Romani minority was the sudden “vanishing” of this ethnic group and its pushing to the sidelines of society. The director ascribed that isolation to the rapid impoverishment of this community, which – according to the director – was indirectly related to the political changes in Slovakia that took places more than two decades ago. Martin Šulík made numerous references to the fact that the Romani problem “was not an ethical or racial issue, but resulted from poverty.”

“It is a film about communication,” said director Maciej Pieprzyca, during the meeting with the festival audience. Pieprzyca is the director of the famous Life Feels Good. Pieprzyca talked about his preparations to the film and also about his inspirations and ideas. The audience was surely surprised to discover his deep sensitivity. It all started with the documentary Like a Butterfly by Ewa Pieta, which was in turn inspired by the Nie jestem rośliną (I am not a vegetable) article in the newspaper. Both are stories about Przemek – a completely paralysed boy, who can neither move, nor talk. Doctors diagnosed him as severely mentally retarded and doomed for slow vegetation. Fortunately, reality turned out to be entirely different. It was discovered that his brain was completely intact. Maciej Pieprzyca met with Przemek in person, on numerous occasions, during the many years of collecting materials for the film. However, the director emphasized that he intended to present the story of the boy in a more universal light, making a reference to his own imagination of a film director.

When asked about the decision to cast Dawid Ogrodnik as the main protagonist in Life Feels Good, Pieprzyca replied that the actor turned out to be a very sensitive boy, who would throw himself completely into the character he portrayed. One of the interesting issues discussed during the meeting was the sceptical approach to making a film about disability. The director was confronted with the opinion that Poles are intolerant and no one would want to see a film about a disabled person. Fortunately, it was exactly the other way around.

On Thursday, the audience had a chance to observe two different standpoints of two completely different directors, who came from different parts of the world and disparate cultures. The guests invited as part of the Shortcut international competition were: Ali Asgari – a director from Iran and author of More than two hours, and Emmanuel Levy – French, author of The Broken Ear. One could say that the things that divided them dominated over those that they had in common. Their films are seemingly different from each other, and both of them are also different from each other, as they come from two, totally different cultural spheres. However, quite surprisingly, one can find a common denominator for their film work.

Emmanuel Levy is a self-taught filmmaker. The Broken Ear tells a story about family relationships, or the lack thereof, to be more accurate. During the meeting, the director talked about the contemporary social structure in France and the enormous freedom that people in France experience. This leads to the slackening of family ties or – more generally ­– of interpersonal ties, which is a huge problem. The key element in the Emmanuel Levy’s film is the son, who develops a psychosis and escapes deeper and deeper, into his inner self.

Ali Asgari is another example of a film director, who has not graduated from any film school, and chose management instead. His film is a shocking one. The presented story must seem quite unfamiliar to a viewer, who is not involved in the traditions of the Near East. What comes as an even greater surprise, the story is true. What is More Than Two Hours about? It is about two young people, who are refused any assistance in hospitals, because they are not married.