Seidl: “My films are supposed to be uncomfortable”, or the sixth day of Tofifest 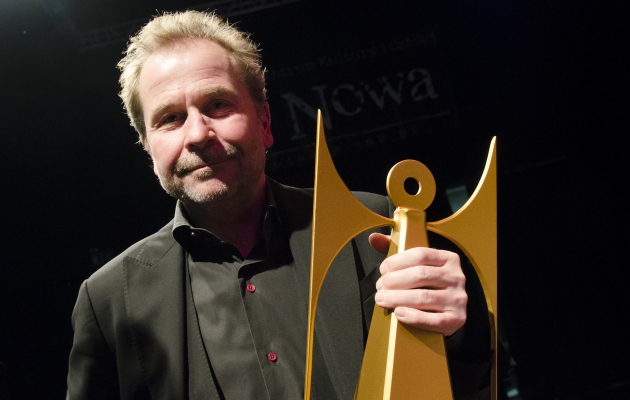 Saturday, penultimate day of the Tofifest IFF brought a pleasant ceremony of awarding the Golden Angel to an outstanding Polish film director Krzysztof Zanussi. Another important event of the day was the Masterclass of Ulrich Seidl, an alphabet of editing with award-winning Milenia Fiedler, and the coolest film workshops for children – Filmogranie!

The symbolic beginning of the day was the awarding the Golden Angel for Lifetime Achievement to Krzysztof Zanussi. More than that, the master of cinema also met with the audience. Krzysztof Zanussi is a famous ambassador of Russian cinema in Poland and he was a guest to a special section at Tofifest 2013, i.e. the image of women in Russian cinema, under the patronage of Bella.

Young filmmakers had a chance to meet with Milenia Fiedler, who conducted a special class titled “The Alphabet of Editing”, at Centrum Cinema. Milenia Fiedler is one of the most titled editors in Polish cinema, who has worked for more than 100 significant film projects. The very same Centrum Cinema was a place, where Ulrich Seidl – a special guest to Tofifest – conducted his Masterclass. The class with Ulrich Seidl focused on the issues discussed in the “Paradise” Trilogy.

Yet another significant event of the day was the stage play “Danuta W.”, performed by Krystyna Janda, a great Polish actress and a winner of Palme d’Or. The performance was accompanied by a special guest – the title Danuta W., or Danuta Walesa, the wife of Lech Walesa and the author of the best-selling autobiography “Dreams and Secrets”, on which the monodrama was based. Both ladies had a meeting with the audience, in the evening, directly after the performance.

But let us not forget about the last films screened in the ON AIR main competition. The Israeli Rock the Casbah is a powerful story abort a group of young Israeli soldiers, who were sent on a mission to the Gaza Strip. When they are about to begin their mission, none of them realize that they will never be the same. The other film of the competition was the Georgian In Bloom by Nana Ekvtimishvili and Simon Gross. The film is set in 1990s and tells a beautiful and nostalgic story about a two teenage girls, whose innocence is brutally confronted with the world of male dominance. The last two days screened on Saturday was Ida by Pawel Pawlikowski, which won the Gdynia Film Festival, and the triumphant of Berlinale 2013 – Senada by Denis Tanovic.

Now, let’s take a closer look at yesterday’s meetings. The 11th edition of the Tofifest IFF was honoured by the presence of Ulrich Seidl, film director from Austria, who has gained international recognition. During an open meeting with fans of his film work, the director was accompanied by the charismatic Margarete Tiesel, one of the most favourite actresses of Ulrich Seidl’s. Ulrich Seidl was also awarded the Golden Angel for Artistic Insolence, by Katarzyna “Kafka” Jaworska, director and organiser of the festival.

The majority of the questions addressed to the director focused on the phenomenal and outstanding nature of the Paradise trilogy, i.e. Faith, Hope, and Love. The audience wanted to know about his inspirations, when working on the project, the media he used, the goals he pursued when looking at the topics swept under the carpet – the topics that seem uncomfortable and taboo to western societies. The road to the final effect was not an easy one. The casting for main characters took a couple of years. Ulrich Seidl made an effort to meet each of the actors in person, during many private meetings. When asked about the decision to cast Margarete Diesel, he justified his choice saying that the actress had an incredible talent for improvisation, which determined the nature of the film material he created, when making the film.

Seidl said that “he likes to know that his films are uncomfortable and the audience feels discomfort.” The trilogy is most often interpreted as a tale about the loneliness of the modern man, regardless of their age, sex, nationality or religious beliefs, and about succumbing to weaknesses and desires, which are often compared to animal instincts. The director does not desire to facilitate the reception of his films and deprives them of any figurative elements, thus making his films shocking and memorable. The mantra of Ulrich Seidl is authenticity, realism, and breaking of taboos. There is no place for misunderstanding. The director emphasized that the discussed sociological problems cannot be identified only with Austrian society, by any means: “My message was to show a general picture of western societies, using a distorted mirror.” According to the master himself, the most important aspect of his films is to stimulate the audience to perceive the reality in a more mature way, which predestines his films to be outstanding masterpieces of contemporary cinema.

Polish independent film director Bodo Kox was of the guests to this year’s edition of Tofifest. He had a meeting with the audience to discuss the film, directly after the screening of his latest film – The Girl from the Wardrobe. Bodo Kox started the meeting with explaining the meaning of independent cinema.

According to his understanding, the project he is currently working on is entirely his, and no one can make any suggestions, as to which scenes to delete, and which themes to add. One can have full independence, when he is the only one to make decisions, as to the form and content of the film. The guest also discussed his personal inspirations. “Music makes me see images,” he said. It turns out that one of the songs Bodo Kox listened to when working on the film, recalled the image of flying zeppelins. This is the reason why this motif reappeared in the way Tomek (performed by Wojciech Mecwaldowski) perceived the world. When asked about the reason to cast a novice Magda Rozanska as the main protagonist, Bodo Kox said that when he saw her come to the casting session, wearing her unique clothes, she seemed to have come out of the wardrobe, just to meet him. The director claims that he keeps his distance from people, same as the title girl from the wardrobe. “I often do not feel like going out,” he commented. He confessed that he loved people in general, but feared the behaviour of a group. Bod Kox was very laidback, during the entire meeting. He established extraordinary contact with the audience. The jokes made by the director met with applause of the entire audience.

Enthusiasts of cinema had an opportunity to meet with Roman Jarosz and Izabela Igel – founders of the Alter Ego Pictures production company. Floating Skyscrapers by Tomasz Wasilewski was the first production of the company, which won, among others, East of the West Award at this year’s edition of the prestigious Karlovy Vary International Film Festival, and Audience Award at the T-Mobile New Horizons International Film Festival.

Floating Skyscrapers is a story about a young and promising swimmer Jakub (performed by Mateusz Banasiuk), who life turns topsy-turvy, when he meets Michal (performed by Bartosz Gelner), at a party. The men initially become friends, but soon their relationship develops into something more serious. Kuba is shocked to discover his homosexuality and the boy tries to deny the feeling that is growing inside of him. Over time, the affection becomes stronger and starts to overwhelm Kuba’s relationship with Sylwia (played by Marta Nieradkiewicz), which seemed to be a happy one.

“What won our hearts in the script was the truth and sincerity in the way the story was told,” said Roman Jarosz, adding that “they never intended to make a social film, which would attempt to change the reality. The discussion that will sweep through the country will affect the society, but this is not our primary goal,” said the guests. However, both of them realize that this film production may stir emotions. “People either love the film, or hate it, from the bottom of their hearts,” said Roman Jarosz. The producers revealed that they were working on a number of projects, one of them being the newest film by Bodo Kox. “We intend to make films that are one of a kind – sincere and auteur,” concluded the producer.