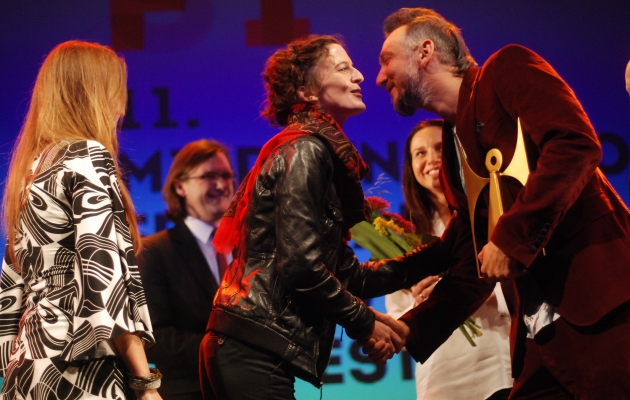 Tofifest awards have been given. Angels stay in Poland. The awards of the Tofifest International Film Festival were given on Sunday, during the Closing Ceremony. Grand Prix – the Golden Angel in the On Air competition has been awarded to director Bodo Kox and producer Wlodzimierz Niderhaus for their excellent “The Girl from the Wardrobe”. All other awards were divided among filmmakers from Poland, Cuba, and the USA.

The decision made by an international jury to award “The Girl from the Wardrobe” was unanimous. When accepting the award, Bodo Kox took a moment to thank the festival itself: “This festival and I had been growing in parallel. When it was still an independent festival, I was here, as one of those independent filmmakers. Today, Tofifest is an international and classy festival, and this makes me twice as happy to receive this Angel.” The financial prize, funded by Piotr Calbecki, Marshal of Kujawsko-Pomorskie Province, will be collected by the film producer — Wlodzimierz Niderhaus, the director of WFDiF (Documentary and Feature Film Production Company).

Similarly, the main award in the Shortcut competition has been presented to another Polish filmmaker. It went to Pawel Maslona for “Magma”. The financial prize in that competition section was funded by Bogdan Zdrojewski, Minister of Culture and National Heritage. The Best Director Award of the 11th edition of Tofifest went to Carlos Machado Quintela from Cuba, for “The Swimming Pool”. The financial prize in that competition was funded by Agnieszka Odorowicz, director of the Polish Film Institute. The triumphant in the From Poland competition was “Life Feels Good” by Maciej Pieprzyca, while the main prize in the Localisations competition went to Piotr Grabowski and Jacek Piotrowski for their “Na własne ryzyko”. Honourable mentions were given to Anahita Ghazvinizadeh, an American filmmaker of Iranian origin, for her “Needle”, and to Pawel Slomkowski for his “Sportowiec”.

Tofifest has proven to be one of the most significant film events in Poland and the title of a “rebellious festival” is certainly not an exaggeration. The guests invited to participate in the festival included Ulrich Seidl, Krystyna Janda, Kazimierz Kutz, Malgorzata Szumowska, Wojciech Smarzowki, Marian Crisan, Martin Sulik, Jacek Dehnel, and Danuta Walesa.

More than 100 films, divided into ten-odd sections, were presented during the festival, and they were accompanied by debates, discussion panels, concerts, and DJ sets. The next edition of this Torun-based event will take place in the autumn of 2014. Final results of the Tofifest International Film Festival 2013:

Golden Angel in the On Air competition

The Girl from the Wardrobe, dir. Bodo Kox, Poland

Justification: “For a convincing demonstration of the many ways of perceiving the reality, regardless of how distorted it may appear.” The prize is 20,000 PLN, funded by the Marshal of Kujawsko-Pomorskie Province Piotr Calbecki.

Golden Angel for the Best Director

Justification: “For the purity of the means employed to achieve a perfect composition and for empathy, circumspection, and sacrifice.” The prize is 20,000 PLN, funded by Agnieszka Odorowicz, director of the Polish Film Institute.

Golden Angel in the Shortcut competition

Justification: “For the masterly demonstration of alienation, presented in a well-thought and disciplined form.” The prize is 15,000 PLN, funded by Bogdan Zdrojewski, Minister of Culture and National Heritage.

Honourable Mention in the Shortcut competition

Justification: “For the creating of a convincing film story, which combines simplicity and an abundance of essential meanings.”

Golden Angel in the From Poland competition

Golden Angel in the Localisations competition

Justification: “For the ability to tell a story and bring the truth out of the actor.”

Honourable Mention in the Localisations competition

Justification: “For a sensitive observation of the protagonist struggling with himself.”

Special awards – special mentions given at the Tofifest festival