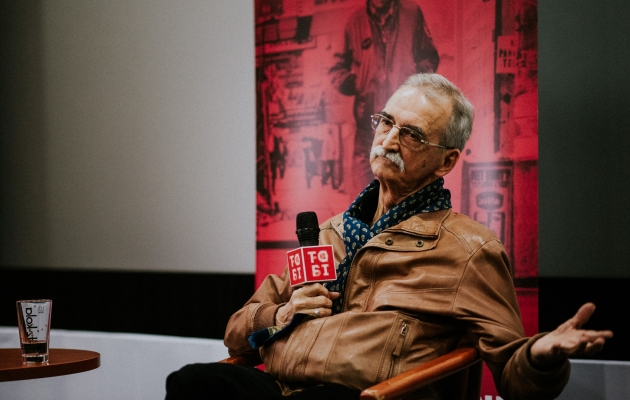 I have never been a darling of film critics, said Marek Koterski, winner of this year’s Golden Angel Award for Artistic Insolence, during a meeting with the audience. And he was not the only celebrity to have paid a visit to Tofifest, on Sunday. There was also Jan Englert, who was awarded the Golden Angel for Lifetime Achievement, and a screening of Greg Zglinski’s latest film, which is referred to as “the answer to David Lynch's Mulholland Drive”.

Koterski proved that he certainly deserves the “rebellious Angel”, like nobody else. And the author session with the director was also a unique experience. The reason being that Marek Koterski had that meeting with himself! And it was surely a success. He offered somewhat bitter and honest comments on his relationships with film critics, and also revealed rather surprising reasons behind his becoming a film-maker. A report on the meeting is available on the Tofifest blog.

“Where am I? Here. And where is here?” This short dialogue is a very accurate hint portraying the aura in “Animals” (“Tiere”) by Greg Zglinski, who had a meeting with the audience, following the screening of the film at Tofifest. We’ve already mentioned that “Animals” have a lot in common with the atmosphere created in “Mulholland Drive” by David Lynch. However, Greg Zglinski clarified that although the film by David Lynch did offer an answer to the riddle hidden in the film, it was not the case with “Animals”.

Sunday also marked the ceremony of awarding the Golden Angel for Lifetime Achievement to Jan Englert, an outstanding theatre and film artist. Another important highlight of the day was the Polish première of “Smugi”, a documentary film directed by Marcin Gladych, which is dedicated to the distinctive artistic family from Torun – the Smuzny family. Reports on both events will soon be available on the Tofifest blog.

In the Rain of Tulips – This is what the opening of Tofifest 2017 looked like!

Adrian Stelmaszyk from the Tofifest Press Office has given an account on the Opening Ceremony of the Festival, on our blog (the official report — see here). He came back to the beautiful moment of the ceremony, when everybody in the audience received a tulip – it was the idea of Kafka Jaworska, director of the festival. As many as 1,000 flowers were given away, during the ceremony.

He also reminded us of the words spoken by Marek Koterski, when accepting the Golden Angel: When receiving an award, there is always this one sentence that we hear: “I really did not see it coming.” But the truth is that I really did not see it coming, said Marek Koterski. You are most important to me, because thanks to you I can always find the strength to complete another film, he added. See the report by Adrian to find out what Katarzyna Nosowska said, when receiving her very own Golden Angel. Go ahead and take a look.

Reviews, reviews! Slaughter at “The Party”, Molecular Physics on the screen, and Freedom in Georgia

We have already received first reviews of some of the films screened at Tofifest, written by reviewers working in the Tofifest Press Office. Anna Badziag has offered the following opinion about “The Party” (the “Must Be Must See” section): “An emotional roller-coaster at a small party! Sally Potter, the director and scriptwriter behind the film, is again successful in transferring deep emotions of her protagonists to the audience. However, she has taken us up by surprise with her completely re-freshened form. You can find a full review of the film with Kristin Scott Thomas in the leading role on our blog.

Dawid Smyk has watched “Photon” (the “From Poland” section) and reviewed it for you: “With his latest film, Norman Leto has pulled off a number of things that are seemingly impossible. He has not only proved it to us that Molecular Physics can actually be cool, but also built an unprecedented monument to the unique love affair between hard science and art.”

The dark side of Georgian traditions has been discovered by Anna Skoczek, who provided a review of “Dede” (the “On Air” Main Competition), directed by Mariam Khatchvani. Anna emphasises that the film from Georgia marks a very solid start for the ON AIR section: “Dede corresponds perfectly to the concept of rebellion behind the festival. On the screen, we see a couple of years in the life of a young woman, who with every fibre of her being denies the rules and traditions deeply rooted in an isolated rural community she lives in.”

The beautiful Monday and Tuesday with films are now ahead of us. You can find the full programme for both days, full of films and meetings with film-makers, below: