Cate Blanchett delivers her “Manifesto” and it has a result. Day 4 at Tofifest 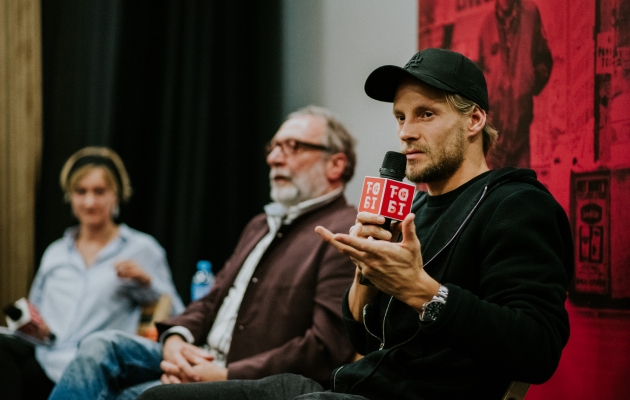 It is without a doubt that film screenings from the last two days included two films that made the audience deeply moved. They were “Custody” by Xavier Legrand and “Manifesto” by Julian Rosefeldt. There were also visits paid to the festival by interesting people from the film industry.

Wednesday marks the day of meetings with Polish film-makers, at Tofifest. The audience will have a chance to meet Malgorzata Zajaczkowska, brothers Michal and Wojciech Wegrzyn, and Tom QLHead, authors of “Rage”. The film is featured in the FROM POLAND competition at Tofifest, and it is one of the very few feature films from Poland that were produced completely independently. Two other guests coming to visit us on Wednesday are film director Pawel Maslona and screenwriter Bartlomiej Kotschedoff, both of who are authors of “Panic Attack” featured in the FROM POLAND competition.

The film programme includes, among others, the brilliant “Loving Vincent”, the latest film by Michael Haneke – “Happy End”, and the controversial “More” (“Daha”).

There was a lot of action happening at Tofifest, on Tuesday. People from the Tofifest Press Office literally flocked each of the venues to give accounts on meetings or review films for you.

Polish Football and the “American Dream” in Lithuania

Many enthusiasts of Polish cinema were interested in attending the meeting with Sebastian Fabijanski, a rising star of Polish cinema, and with Jan Kidawa-Blonski, the director of “Stars”, one of the films featured in the FROM POLAND competition. “Stars” is a film biography of Jan Banas, a legendary football player from Poland. Sebastian Fabijanski and Jan Kidawa-Blonski (“Destined for Blues”, “Little rose”) gave a little insight into the making of the film. It was interesting to learn that the film script was based on a collaboration with the football star himself. Initially, Banas was quite reluctant to share the secrets of his life, but he finally let the film-makers on them. And what happened then? Read a report provided by Dawid Smyk (in Polish).

The Tofifest audience also had a chance to meet with the authors of “Miracle”, a Lithuanian-Bulgarian-Polish-British co-production, featured in the ON AIR Main Competition. Its director Eglė Vertelytė and producer Radka Bardes paid a visit to Torun. What was the reason for film producers from four different countries to get involved in a début film project of a film director from Lithuania? The answer to that and many other questions came during a meeting following the screening of the film, and Anna Skoczek meticulously noted them all (in Polish).

The art of manifesto, the art of (un)loving, and the art of loving. We had a chance to experience three different emanations of “art”, during recent film screenings.

Naturally, the art of manifesto pertains to “Manifesto” directed by Julian Rosefeldt. Lena Paracka from the Tofifest Press Office has reviewed the film featuring a brilliant performance by Cate Blanchett in the leading role: “Manifesto” is one of those films that need to be seen more than once (it would be best to have a notebook and an encyclopedia of art in your hands), in order to comprehend it. All of its elements have touched a part of me, but I am not sure which part it was exactly, and it will take some time for me to discover it, wrote Lena in her review.

As for “the art of (un)loving”, Dawid Smyk believes that it is the case of the latest film by Andrey Zvyagintsev – “Loveless”. The latest offering by Andrey Zvyagintsev has won the Jury Prize in Cannes, this year, and it will surely satisfy all fans of the director, assures Dawid. From the formal point of view, the film is simply marvellous. Controlled directing, breathtaking shots, systematic camera work exemplified by Mikhail Krichman, and flawless acting performances, he adds.

The last of the three “arts” is a review of “The Art of Loving. Story of Michalina Wislocka” by Maria Sadowska. The book written by Michalina Wislocka was a big it back in the 1970s, and it turned the sex lives of Poles upside down. However, one must ask a question, whether this revolution is over, or maybe it is still going on. The film dedicated to the life of Michalina Wislocka offered an excellent pretext for answering the question above, wrote Anna Liczmanska from the Tofifest Press Office.

Following the screening of the latest film by Robert Wichrowski – “Son of the Snow Queen”, its authors, namely Robert Wichrowski, Anna Seniuk, Rafal Fudalej, Robert Czebotar, Marcin Swistak, Piotr Mikolajczak, and Anna Moczulska, had a meeting with the audience. You can find out why Agata Budarewicz, who published a report on the screening and the film, called it a graphic fairy-tale, in a blog review (in Polish).

What’s more, Tofifest played host to the visit of French film director Xavier Legrand, author of “Custody”, a fascinating film début, who had a meeting with the audience, after the screening of his film. The film discussing the issue of family violence and manipulation is featured in the ON AIR Main Competition at Tofifest. The director has managed to reach beyond the simple scheme in which everything is right on the plate, from the beginning, instead manipulating the audience in a manner that is commonly used by the perpetrator, wrote Marek Sofij in his report on the meeting with Xavier Legrand.

On Tuesday evening, there was also a chance to participate in a special event that accompanied Tofifest 2017, i.e. a meeting of an unofficial forum for exchanging ideas that goes by the name of A Discussion Club, Essentially. During the meeting held yesterday, the originators of the Club, Mateusz Lapinski and Jaroslaw Jaworski, focused on the issue of the growing oversimplification of cinema. The main conclusion reached by the participants of the Club was that it is necessary to continue discussing the matter that is not taken up by film media, for unknown reasons.