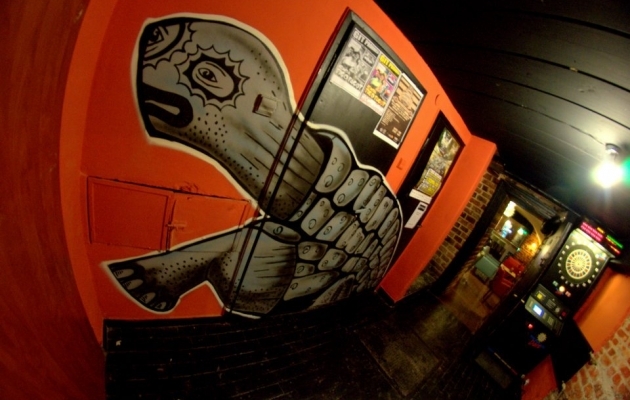 Muppet Boys refer to themselves as “freaks from the City of Ginger”. The band is comprised of four musicians, who have played together for three years. Their music is a blend of rock’n’roll, country and blues, with a large amount of punk rock sound. Tarło party — It is a DJ party, organised and managed by two musicians from Muppet Boys.

Minimal Cowboys is an ephemeral group, comprised of the well-known Torun-based Perpetual Motion Food Dadaistic collective, i.e. Lech Nienartowicz and Rara. The artists have reduced their musical means and composers’ ambitions for the sake of free improvisation and contemplation of sound. WECK is a young band from Toruń, which has been started by experienced musicians and members of Hotel Kosmos and Tin Pan Alley. The music offered by WECK is a never-ending experimenting with structure and sound. It’s avant-folk mixed with psychedelic sound and ambient transforming into noise. It is improvisation, deconstruction and meditation. Alpha Couple — an experimental duo from Toronto, comprised of former owners of an art gallery, i.e. Kristel Jax and Mark Wohlgemuth. They create kaleidoscopic sound collages, based on textural instrumental sounds. They have already performed in more than 20 countries in the world. A split album of Alpha Couple and Mokh (a sound artist from Moscow) will be released this autumn, through Dumpster Diving Lab of Moscow.

Jesień is a young band, which music escapes the stereotypical definition of rock music, becoming more of a combination of garbled compositions, full of suspense and motoric rhythms. The added value is the lyrics written by Szymon Szwarc. We Are Not From Iceland is a popular and award-winning musical group. Their music is the result of using many instruments, including bass, guitar, hi-hat, ride, crash, china, jars, snare drum and vocals. They represent the “hop-siup” musical scene of the Kujawia region.