Crisan: “I love cartoons” or the third day of Tofifest 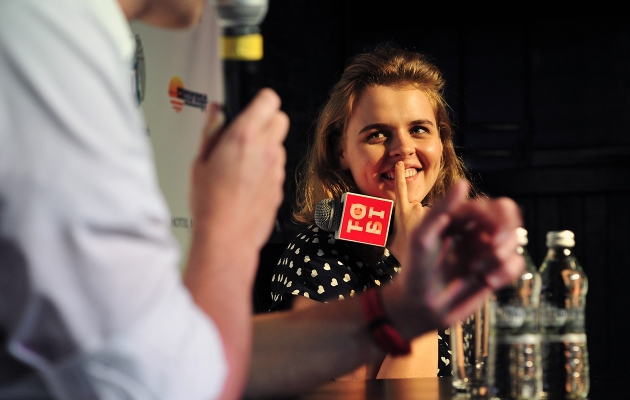 Day three at Tofifest was marked by the meetings with a special guest to Tofifest, Slovakian director Martin Sulik, and director Wojciech Smarzowski, as well as by the discussion about the role of crime fiction in cinema. During the meeting, Martin Sulik accepted the Golden Angel of Tofifest for Lifetime Achievement.

The meeting with Martin Sulik, a special guest to Tofifest, was not the only focus on that artist, as Wednesday started with the screening of a very famous film by Martin Sulik – Working Class Heroes.

As for the ON AIR Main Competition, the audience has a chance to watch The Swimming Pool from Cuba – a subtle story about a single day spent at the swimming pool by five totally different teenagers – and Museum Hours from Austria, a beautiful story about affection discovered in the corridors of a museum in Vienna. The festival’s programme also featured unique short films by Malgorzata Szumowska, which took the audience back to the very beginning of her artistic work: Cisza (Silence), Ascension, and A czego tu się bać? (And what is there to fear?).

There were also competition screenings in the SHORTCUT and FROM POLAND sections. In the Polish films competition, the audience could see Warsaw Stories (the film was followed by a meeting with all directors of the film) and Traffic Department by Wojciech Smarzowski – the director had a meeting with the audience, directly after the film.

Another event that attracted a large audience was the meeting called Grey Matter – one of the Tofifest’s accompanying events. The festival also played host to two journalists from Gazeta Wyborcza Piotr Gluchowski and Jacek Holub, who wrote the biography of Father Tadeusz Rydzyk, titled “Imperator” (Emperor). The day closed with a special screening of Panopticon by Marcin Gladych, which was the first ever social film in Poland (it was filmed in Torun).

Let’s take a while to go back to the meetings on the second day of the festival. On Wednesday, enthusiasts of film art had a chance to have a huge dose of Romanian cinema. The screening of Rocker – the latest film by Marian Crisan – was followed by a meeting with the directors, who is one of the outstanding representatives of the Romanian New Wave and a winner of Palme d’Or in Cannes. Marian Crisan is a sensitive filmmaker, who finds inspiration in the reality around him. According to his opinion, the making of a film starts with a desire to convey a feeling wrapped in narration. “My films are composed of the fragments of the world that I find very emotional,” said the director. This was the story with Rocker, a film that portrays complicated relations between a father and his drug-addicted son. Some more general reflections on the condition of Romanian cinema were also made, during the meeting. When asked about the New Wave, the director admitted that there was some common aesthetics, albeit there was no such thing as a manifesto of the New Wave that would bring all directors together, while the term itself was coined by film critics. When the meeting was drawing to a close, the director was asked about his favourite films. The winner of Palme d’Or surprised everybody by saying that he loved cartoons, and that he could never choose between “Persona” by Ingmar Bergman and “Snow White and the Seven Dwarfs” by Walt Disney, as his most favourite film of all time.

Polish director Katarzyna Klimkiewicz was another filmmaker that met with the audience, yesterday. Her international career began with internationally acclaimed “Hanoi-Warsaw”, which was also honoured with the Golden Angel of Tofifest. This year, we have had the opportunity to see her full-length debut Flying Blind, which was filmed entirely in England. On one hand, the film portrays the reluctance of the British people towards immigration, and on the other the frustration and helplessness of the immigrants themselves. Klimkiewicz made it clear that she intended to present certain emotional relationships on the protagonists, in an extremely honest way: “I put emphasis on the dialogue scenes, where no words were spoken – the language of silence,” said Klimkiewicz. She also added: “I find a piece of myself in my characters.”

The audience also met with Magdalena Berus, who was awarded the Golden Angel of Tofifest for Best Rising Talent of European Cinema. In Baby Blues, Magda Berus gave a magnificent performance, portraying a teenage mother, who sees the world through rose-tinted glasses, and is so inept at and reckless of taking care of her little boy that it leads to a tragedy. Magda admitted that her cooperation with director Katarzyna Roslaniec was a challenging one. From the very beginning, Katarzyna Roslaniec had her own vision of presenting the issue in the film and was constantly watching her debutants to make sure that they followed the vision. Another of the topics discussed during the meeting was the colourful style of the clothes wore by the main protagonist in “Baby Blues”. Magda confirmed that she had found inspiration in her own outfits, which she was very faithful to only a few years ago. Many of the items of clothing used in the film were taken from her private collection.